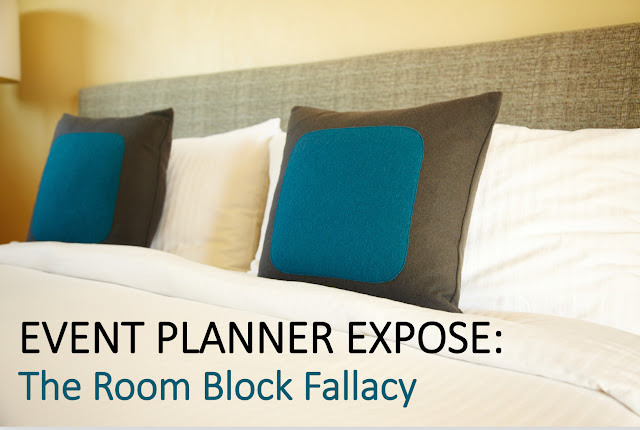 Are you still spending time pre-arranging rooms so that your attendees will get the best rate at your event?   For decades, a practice known as blocking hotel rooms has been the way that event and meeting planners have arranged rooms for their event.   But guess what?

There is a better mousetrap.

I have been in the travel industry my whole adult life, but I will always remember the conference that I attended more than a decade ago in New York where I realized that Expedia had rooms that were cheaper than the "negotiated rate" for the conference attendees. It was at the Marriott on Times Square.

I felt cheated when I found out that a colleague had gotten their room online for $75 cheaper than I had paid.  Since it was a 3 day conference, the savings was significant and especially since I am an entrepreneur and was paying my own way.

Today, more than 15 years later, this is still common practice and the same story plays out every single day.

My company is currently working with a major event that has negotiated blocks at three hotels for their upcoming spring event.  They are expecting 50,000 attendees.  By our calculations, that should translate into 5,000 or more that need or want hotel rooms.

For their fall event, we had contracted with them to put our hotel widget on their website when their block rooms ran out (nearly 2 weeks before the event).

Then, the day after their event, people who had booked rooms started using that widget right away to book the spring event, before we even had a chance to customize the dates!

We were fortunate to be able to keep that widget on their page until they formalized their room blocks (three months later).

Old habits die hard, so we are being patient and waiting until the blocks for their spring event run out. And while we are patient, we want to make sure to let everyone else know that you don't have to go through the old room block song and dance, as it is fraught with problems:

1.  GUESSING GAME - TOO MANY OR NOT ENOUGH ROOMS?

For their fall event they expected over 120,000 attendees.    They had arranged several thousand
rooms with five hotels for their fall event. And while that sounds like a lot, it didn't begin to cover both the "needed" and "wanted" rooms.

But each year for their spring and fall events they "filled" their block, got their commission  (you will see in a minute where that money came from) and they were happy .  They were even able to report back to the city that they had done their part of contributing to the local economy. But guess what, it wasn't as much as it could have been.

The sum total of "need and "want" rooms should be approximately 10% of your attendees and could be as high as 20%, particularly for multi-day events.

I have heard the objection over and over again.  "We do events that are primarily for locals.  They don't "NEED" a hotel room. " 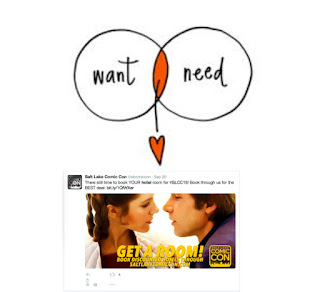 Needed rooms are those that are coming in from out of town (usually more than 100 miles away) where it simply wouldn't be possible to go and come in the same day without a hotel stay.  This can also happen when an event starts very early (such as a triathlon) or it ends very late (like a concert).

Wanted rooms are for those that want to make a weekend of it, those that don't want to miss out on what is going on locally the night before the event, those that live close, but the commute time would add on a ridiculous amount of time to each day.  From a practical perspective, if they were going home to be there for family, they might get home after the kids were in bed or would need to leave before the family was up.

They "want" a room.  Make sure that you are marketing to this kind of attendee and making the offer.

2.  THE WORK FOR THE ATTENDEES TO FIND A ROOM

In this particular case study, the event had a special ACCOMMODATIONS page on their website that showed the negotiated hotel deals.  There was a graphic on their home page that would take you there, or you could find it on the HOTELS navigation.

They showed the hotel locations on the map, but failed to show where they were in relation to the event.

For the event attendee to check availability and rates, it took not only 3 separate clicks off the site onto the three separate landing pages of the hotels (each with their own dialogue and approach), but for two of them, they didn't pre-fill the event dates, so I had to go back to the main event site (not even the accommodations page had the event date shown) and find the date to select on the FROM and TO boxes of the booking engine.

On the third one, they pre-filled dates, but it was for a 15 day block around the 3 day event.  While it was nice of the hotel to extend their negotiated room rate for that entire period, it caused me to have to go back to the event site to look up the dates (again).

I was forced to write down all of the rates for the hotels so that I could compare and decide.   Then I had to go back through the booking engine to request the room and book it (and for a popular event, it was possible that the room would no longer be available). 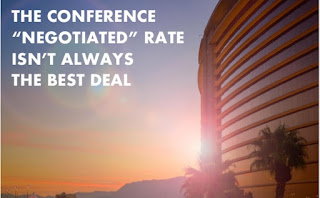 As I mentioned earlier, the conference negotiated rate isn't always the best rate.

In the case of the conference we've been talking about, for two out of the three hotels listed, our rates for those same rooms for the same dates were as much as $31 cheaper per night.  For a 3 day event, that is a significant premium to pay.

And both their site and the hotel site promised the "best" rate, but that simply wasn't the case.  The consumer was paying for the extra amount that the hotel had agreed to give to the event.

With our widget, not only did the user get the best published rate, but we guarantee it and will write a check for 110% of the difference if a consumer finds a better published rate on a website.

You may be too young to remember this sign.   When I was young, we would take road trips and to find a hotel, you had to look for one that did NOT have this sign illuminated.  Archaic I know, but it worked.  Especially since there was no such thing as a phone in your car.  [gasp]

Without our widget, the fall event would have shown SOLD OUT when you checked availability at any of the five properties (after you wasted 10+ minutes searching the negotiated deal links).

With our widget anyone that needed a room, right up to the LAST day of the event (not the day before the event, but day 3 of the three-day event) could book it online.

IT IS TIME FOR A BETTER MOUSETRAP

as a part of the registration or ticketing path.    We call it the "Do you want fries with that?" method.

The best time to get someone to commit is when they have just committed to attend your event.  And why should you get involved?
Not only are blocked rooms no longer needed, but there is a better game in town.   Click the image below to learn more and to request a FREE widget for your event (or for your venue).

Posted by chickefitz at 5:59 PM No comments: 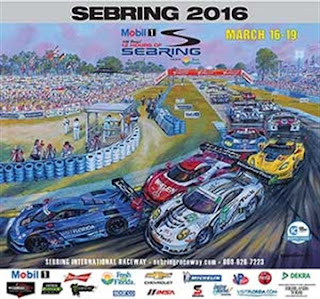 To get a hotel room, click on the image above.


Posted by chickefitz at 3:30 PM No comments: