Success Soup - T is for Team 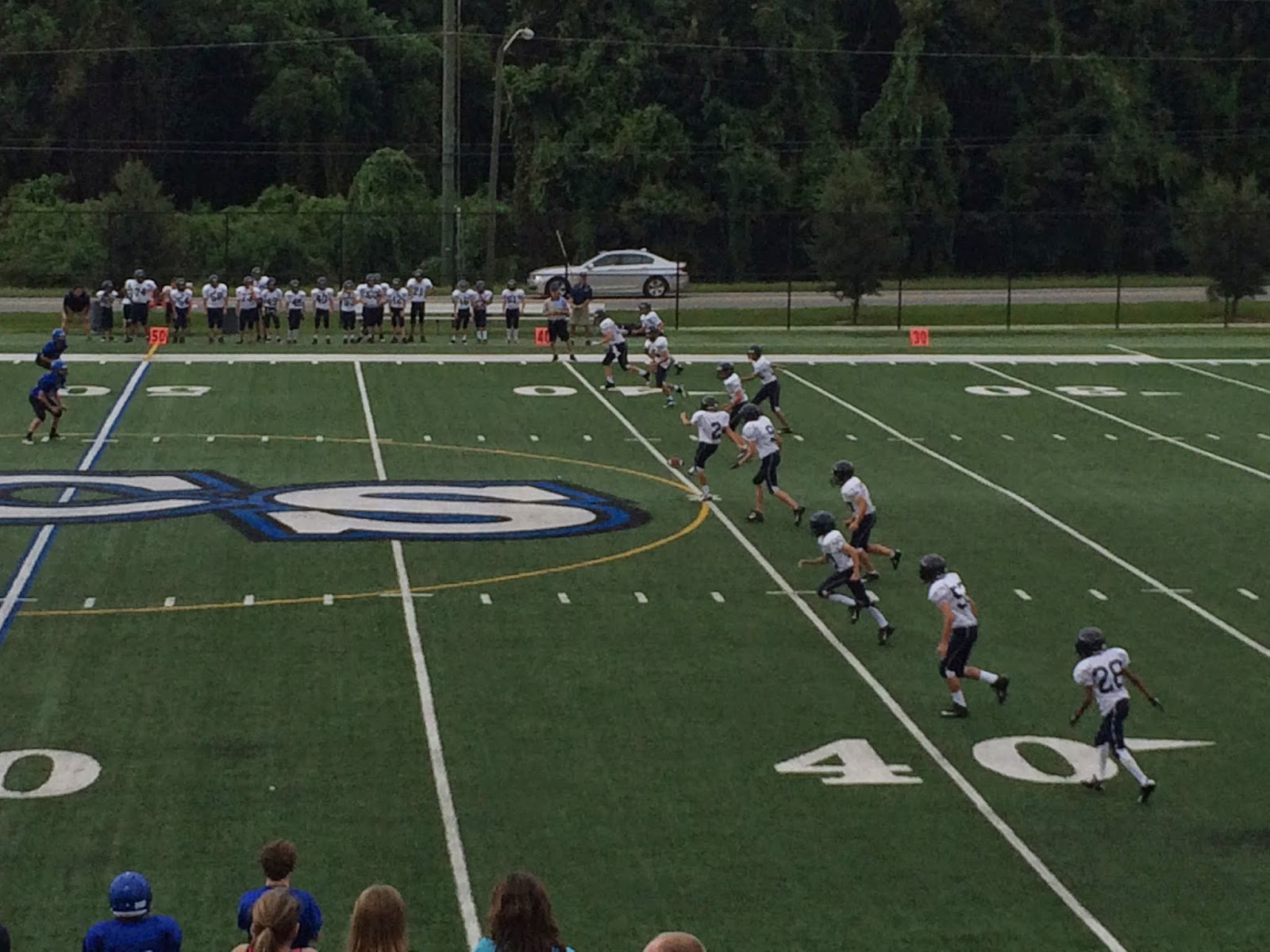 I am a CEO and philanthropreneur, but I am also a football mom and today my story about an important ingredient in success is from my son's football team.

He is on the middle school team of Cambridge Christian School here in Tampa and a proud member of the Lancer's football team.

My son Sergey is an amazing, natural athlete and he plays every single play from the kickoff (he is the kicker), through to every offensive and defensive play in the game.

In many ways, Sergey is like an entrepreneur. He does it ALL.  Whatever the coaches need.  But he doesn't do it alone.  He is surrounded by a team.

When Sergey gets ready to kickoff the ball, the first thing he does (after setting the ball and marking off his steps) is to shout out to his teammates to make sure they are ready.  They then run with him as he sends the ball over to the other team to receive the ball.

The success lesson here is to make sure you are prepared and on your own "game" and then let everyone else know what you need from them and when you need it.  Don't expect them to be mind readers. 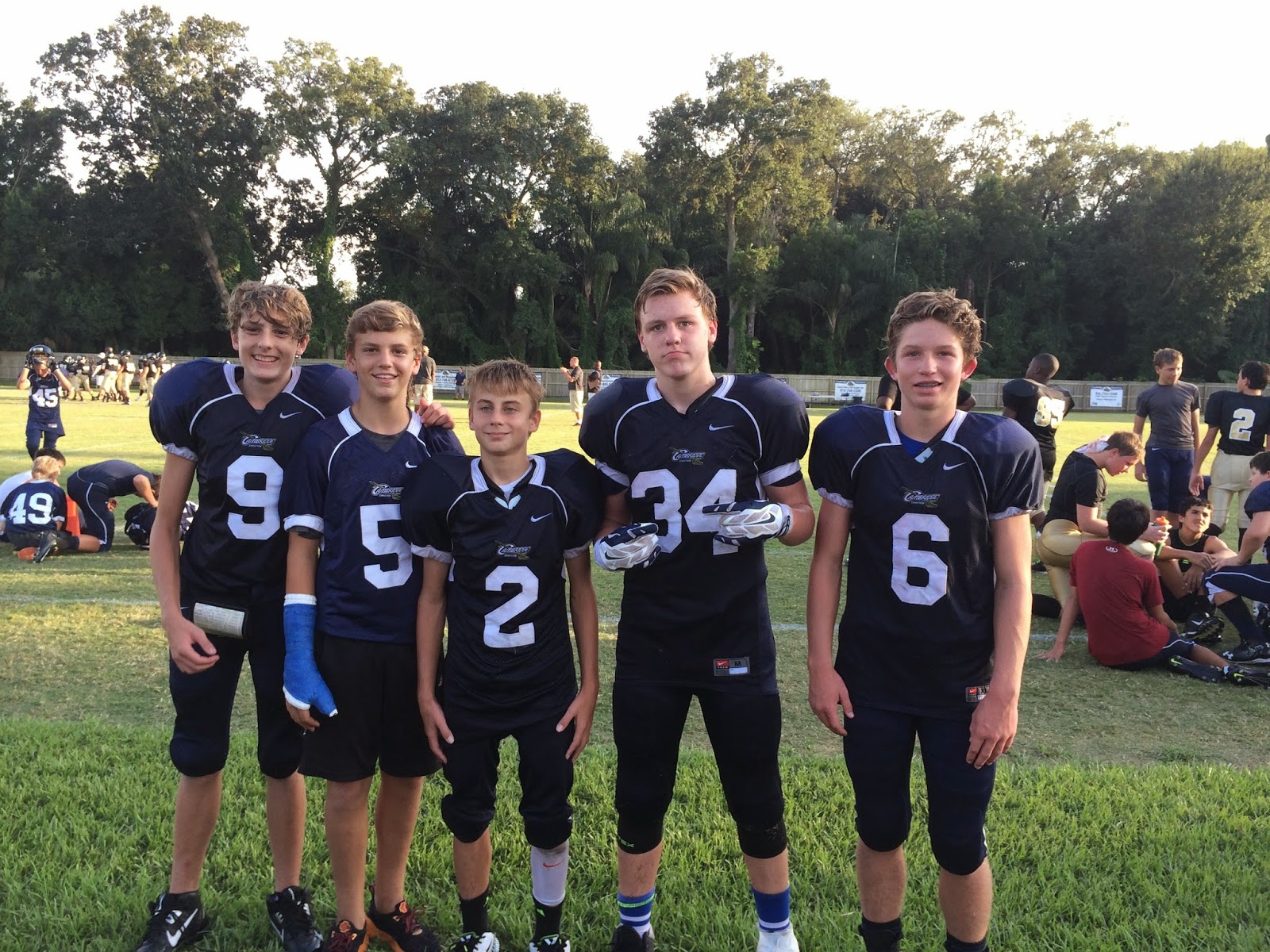 Throughout the game, when Sergey carries the ball, which he does often, he relies on the quarterback to either pass it to him or hand it off to him.

Fortunately for him, the quarterback is one of his best friends and our next door neighbor.  He and Justin have been playing football in the neighborhood since they were old enough to walk.   They know each other so well, that they can anticipate each other's plays.

The success lesson here is to surround yourself with those that you know and trust.   Business is a team sport and finding the right business partners is important.

As you can see in this picture, taken after yesterday's game, Justin (#5) is on the injured reserve list. So their buddy Garrett (#9) stepped in as QB.  I have to admit that Sergey (#2) was a little concerned about Justin being out, but what ended up transpiring in yesterday's game really showed what a team can do.  Our Cambridge Lancers were up against enormous players from Trinity.  One of their linebackers weighed nearly 290 lbs.  The team looked formidable.

The success lesson here is that looks can be deceiving.  That their players were big was a bit scary, but in the end, they proved to be slow and were not at all agile, so the Lancers slipped right past their line and were able to score three times.  Value agility and speed.  Heft can slow you down.

The guys in this picture were a huge part of why our Lancers came away with a 21-20 victory, as they did the bulk of the scoring (with Justin cheering them on from the sidelines).  Garrett and Sergey connected a number of times and because he knew that Sergey could catch and hold on to whatever he threw at him, his confidence as a QB grew.  Garrett connected well with Porter and Jacob as well, and with each score, the team felt better and better about their chances of beating the Trinity team.

The success lesson here is that confidence begets confidence and even if your lead player is on the injured reserve list, make sure that you are cheering on the person that is standing in their place.  Every leader knows the importance of succession planning and every coach knows that to have a deep bench is the best position to be in.

There were three other things I want to mention.

First is that in my mind, the real hero of the game was Noah Froelich.  Love this picture of Coach Shears with him.  Noah is in 6th grade, but is a starter. Noah has the distinction of being the third born of four boys.  His two older brothers are amazing football players.  Zach is on the varsity team.  His brother Justin is the one with the broken thumb.   The older boys and Sergey have played football whenever they could since they were little.  Noah of course, jumped in as soon as he was old enough to hold his own and even Shane, who is in 4th grade gets out there with them now.

Having been the third child myself, I know it is tough to battle the success of your older siblings and to live in their shadow.  But what happened yesterday is that Noah caught an amazing interception during the game and set himself apart as someone other than Zach and Justin's little brother.  It was a decisive play, as the other team was dangerously close to scoring and it would have been very tough to come back to win at that point.  Seeing Noah's face was priceless.

The next success lesson is "do not despise youth".  Make room for the "up and coming" leaders in your organization to shine.   Celebrate them and mentor them.

Next, is the importance of our coaches.  At Cambridge we are so fortunate to have godly men coaching our sons and daughters.  Coach Shears and his staff are amazing and both before and after each game they pray and they remind the boys where their talent comes from.  And they encourage the boys to share their faith with the other team after the game.  I love that about them and am so proud of our boys for not being ashamed of their faith.

This success lesson is about the importance of those who cheer us on and who give us tips on how to succeed.  Listen to them.  Thank them.  And share what they teach you with others.

The last lesson in this blog on teamwork is that in order to succeed, you need others to block and tackle for you.  Sergey gets through the line not just because he is fast and agile but because there are talented team members watching out for him and clearing a path for him.  Thanks Lancers.  You guys are awesome.

Don't forget to thank those that help you achieve your own goals.  And when it is your turn to block and tackle for them, do it with everything that is in you. 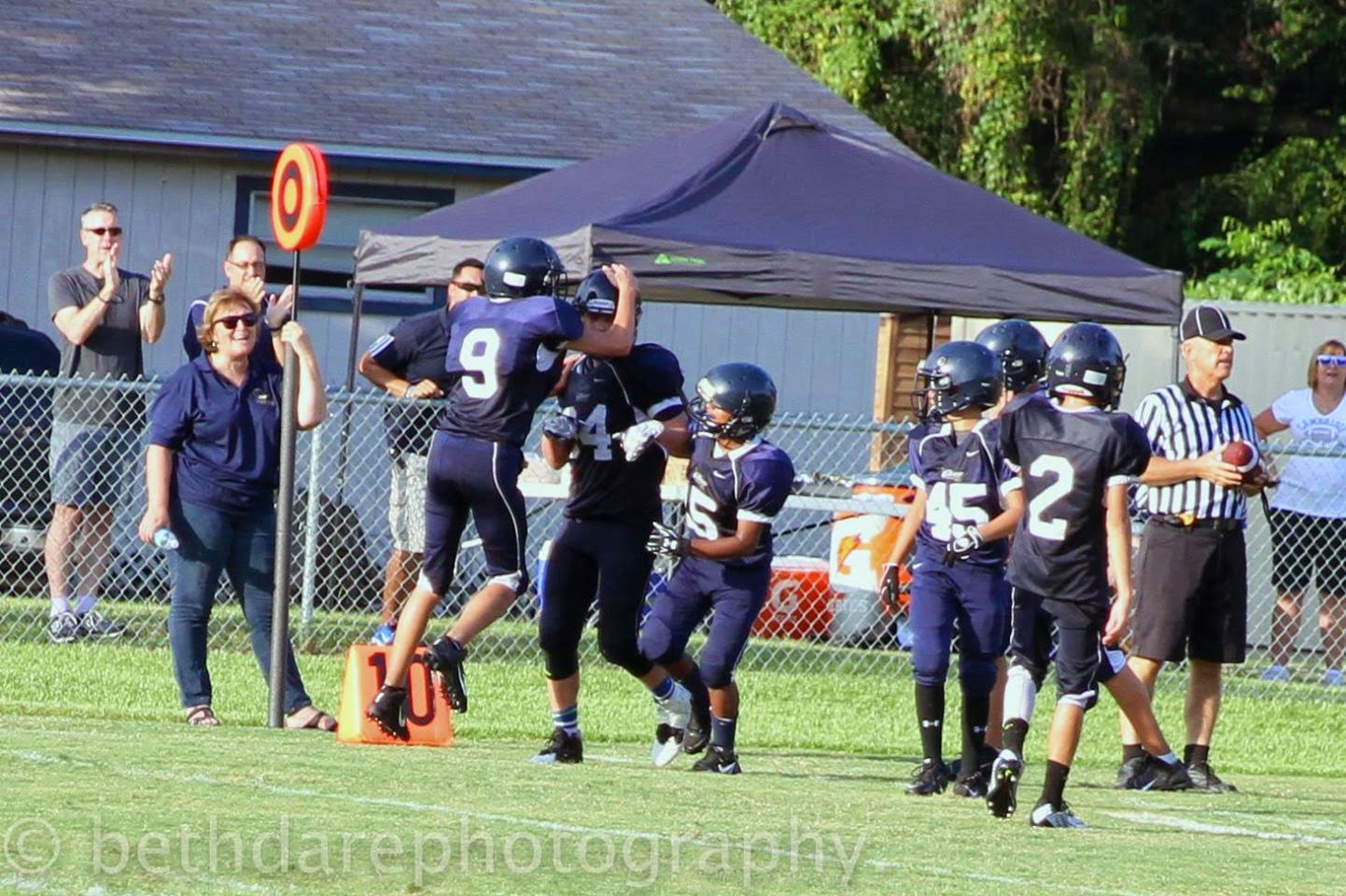 Oh, and by the way, every team also has a "chain gang",  setting the goals and marking the progress.  I was a proud member of yesterday's chain gang, so I got to see the game up close and personal!

So one last lesson - take time away from work and go see your kids games, concerts, recitals, etc.  Life is too short not to learn the lessons from every day life.   And bonding with our kids begins with being involved in their lives.


Success Soup - P is for Profits (of course)

Posted by chickefitz at 6:21 AM