Women and Philanthropy: Shaping a Better World- an interview with Sondra Shaw-Hardy, Buffy Beaudoin-Schwartz and Martha Taylor on Uncommon Giving 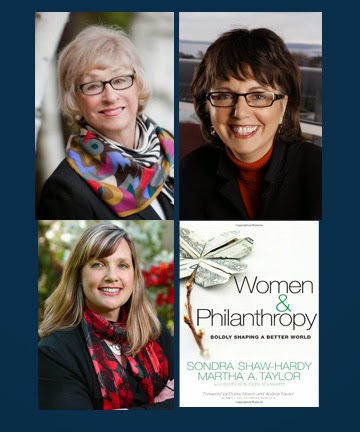 The Rock the World Network is a community of uncommon givers. The Uncommon Giving show features the leaders of charities, foundations and corporations rocking our world. Chicke Fitzgerald interviews Sondra Shaw-Hardy, Buffy Beaudoin-Schwartz and Martha Taylor. The original live interview was on 9/28/2012.

Author, Sondra Shaw-Hardy, J.D., was described by Town and Country magazine as “the pioneer” in women’s philanthropy.

Co-author Buffy Beaudoin-Schwartz has particular expertise in the development and growth of donor collaboratives, women's giving and promotion of philanthropy efforts.


Envisioning the need to take the women's philanthropy message to a national audience, in 1991 co-author Martha Taylor co-founded, with Sondra Shaw-Hardy, the Women's Philanthropy Institute.

It surely began with Adam and Eve: two distinct genders behaving in very different ways.  Two separate ways of giving.  Women have always given of course, but today they are giving their money as well as their time.

Why?  Because not only are women throwing off the old stereotypes of women and philanthropy, they are taking control of their finances—their lives–and acting independently.  Women in the media have championed these changes.

The outcomes of the women’s philanthropy movement are enormous.  Research will continue to institutionalize the movement.  The ways women give will become the norm for all philanthropy.  Best of all, women will see to it that their gifts will make the world a better place.

Visualizing the growth of women’s philanthropy, Sondra chaired the first national meeting on the subject, Women and Philanthropy: A National Agenda, in 1993 at the Johnson Foundation, Wingspread.