#Giving Tuesday: Transforming the Way People Think About, Talk about and Participate in The Giving Season- an interview with Henry Timms on Uncommon Giving 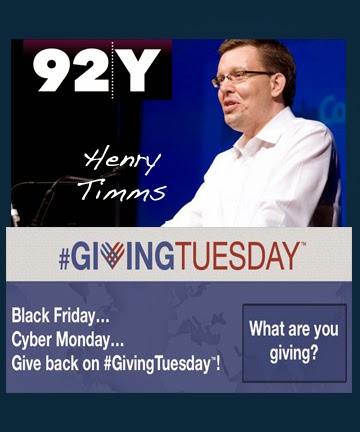 The Rock the World Network is a community of uncommon givers. The Uncommon Giving show features the leaders of charities, foundations and corporations rocking our world. Chicke Fitzgerald interviews Henry Timms. The original live interview was on 3/22/2013.


We have a day for giving thanks. We have two for getting deals. Now we have #GivingTuesday™, the giving season’s opening day. On Tuesday December 3, 2013 charities, families, businesses and individuals came together to transform the way people think about, talk about and participate in the giving season.

The idea for the campaign sprung from Henry Timms, deputy executive director of the Jewish community center 92nd Street Y, and Kathy Calvin, CEO of the United Nations Foundation.

New York’s 92nd Street Y has been the catalyst and incubator for #GivingTuesday, bringing the expertise of 139 years of community-management to the project, and providing #GivingTuesday a home.

Henry Timms has also been instrumental in producing the annual Social Good Summit, in partnership with Mashable and the UN Foundation, which has opened up the UN Week conversation to over 120,000 across the world. Earlier in his career, Henry oversaw corporate strategy for Arts & Business, one of HRH The Prince of Wales’ charities, and helped to launch the Prince’s Foundation for Children and the Arts.

It is never too early to plan your giving year.