Miss the first post in this new series - Alphabet Soup of Success?  Click HERE and go back to the beginning. 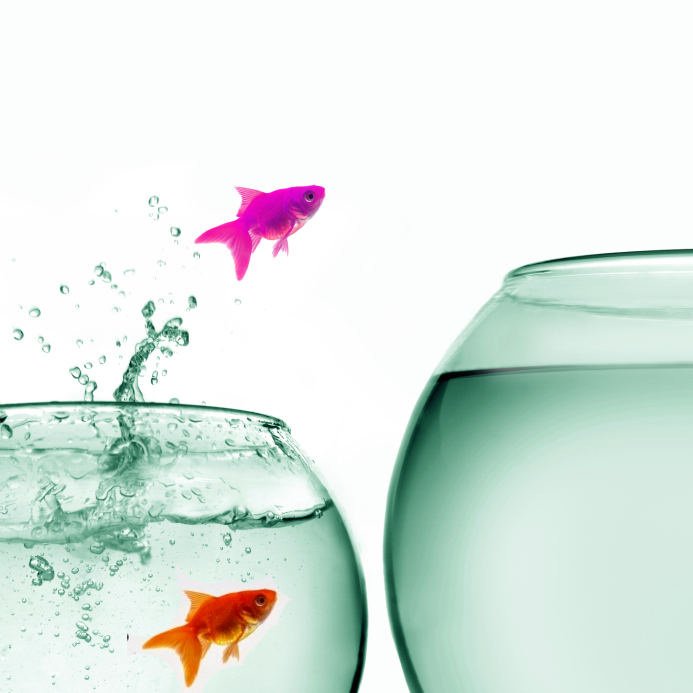 Change is one of those success elements that some of you would just love to run away from.

"Our fishbowl is quite nice and comfortable", you say.

"Look how far we would have to jump to get to the new, bigger fishbowl!  I'm not even sure that I could make it."

"Maybe that isn't even water in there!"

But invariably, there are those of you who just can't wait to be the first to jump.   Like the fuchsia fish in the picture above.

That would be me.  And perhaps it is you.

They call us early adopters.  They call us different.  We stand out in a crowd because of our unwillingness to conform for conformity's sake.

Because of that, we don't make good corporate soldiers, which is why many of us left Corporate America (or for my readers from France, Germany, China, Russia, Turkey and the Ukraine, fill in the blank with your country).

Some of us became consultants (we make good ones because we can see the new fishbowl clearly and without fear).  Others became entrepreneurs so we could jump at will from bowl to bowl.    Some of us did both.

It isn't that we don't like comfort.  It's just that change is the very air that we breathe and to remain in the status quo is so much more dangerous for us than jumping.

If it is cold, we will just swim all that much harder to warm it up.  If it isn't the water that we know and love, we will adapt.

When water does not move or have air circulated through it, it becomes stagnant.  The same is true with businesses.  Movement is healthy.  Circulation is good.  Stagnant is bad.

To build a successful, sustainable business, change is a mandatory element of your plans.  It goes by different names - differentiation and innovation to name a few.

Build them into your culture.  Reward failure, because those that do not try never fail.

The real key here isn't just changing.  It is the ability to embrace change and to become an agent of change.

Tomorrow is D Day.  That is not a bad thing.  But I will warn you in advance, the word is DARE and I am going to borrow on the title of a white paper that I wrote several years ago called Dare to Differentiate and give you two "D's" for the price of one.