Live Your Dash: Make Every Moment Matter- an interview with Linda Ellis on EGG Live! 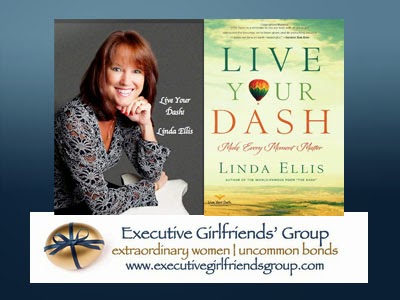 This on demand audio series is a part of the Executive Girlfriends Group Vignette Series. Chicke Fitzgerald interviews Linda Ellis. The original live interview was 5/31/13.

This episode is #63 of all time in the top 100 shows on Solutionz Live!

Linda Ellis started writing poems as a child, a talent inherited from her Irish grandmother. She spent years working in the corporate world, but after her first poem was shared on a syndicated radio program in 1994, an alternative career began to emerge and she soon came to the realization that her true passion was in creative writing.

She wanted to write something deeper and even more meaningful about the concept of The Dash.  So she wrote a new poem, a sequel to the original. This new inspiration has now blossomed into a 256-page hardcover book filled with original prose, poems and inspirational stories.

Thirty-six lines that have touched millions, Titled simply — The Dash — these 36 lines have touched millions of lives and have literally taken on a life of their own by traveling all over the world. I call it uncomplicated poetry in a complicated world, which became a slogan to describe my inspirational writings and my company, Linda’s Lyrics.

For more information about the Executive Girlfriends' Group see: http://www.executivegirlfriendsgroup.com