When I Met Food: Living The American Restaurant Dream- an interview with restaurateur, Kathy Sidell on EGG Live! 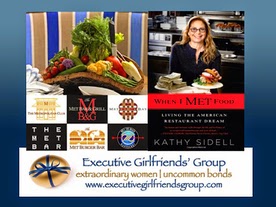 This on demand audio series is a part of the Executive Girlfriends Group Vignette Series. Chicke Fitzgerald interviews Kathy Sidell. The original live interview was 12/21/12.

Kathy has been recognized for her foresightedness in identifying new concepts in culinary trends and introducing them to Boston.

Kathy Sidell's earliest memories take her back to food. At age 5 she was taken with her grandmother's artistry in the kitchen, and even more so by the big, family meals shared on the front porch of their seaside home. Though raised among foodies– her mother, a talented home entertainer, her banker father who single-handedly is credited for building the restaurant business in Boston; and a sister, now a chef and restaurateur–Kathy s route to food was not as linear.

In October of 2011, Kathy opened her newest venture, MET Back Bay, on the corner of Newbury and Dartmouth Streets in the heart of Boston’s historic Back Bay.  MET Back Bay is housed in a landmark brownstone and features four separate dining areas including the Library, the Ham and Cheese Bar, the Dining Room, and the exclusive, members-only Townhouse.

Once a month she and her executive team along with Style Boston, a regional lifestyle television show, highlight food trends and New England hotspots. The show, 24 Hours with Kate airs on WCVB/ABC. The Met Team has traveled and filmed segments in Woodstock, Vermont, Portland, Maine, Providence, Rhode Island, New Haven, Connecticut and Provincetown, Massachusetts.

Her early life as a film producer developed her love for story, themes, and setting. But by age 47, she found herself drawn back to food and the risk of restaurant life. When I Met Food chronicles this adventure, from how she selected her first location to the careful branding decisions required to build a highly successful restaurant enterprise in metropolitan Boston. In this engaging book, Kathy shares her business savvy peppered with encounters with influential people and even favorite recipes for the aspiring chef.

For more information about the Executive Girlfriends' Group see: http://www.executivegirlfriendsgroup.com
Posted by chickefitz at 7:00 AM