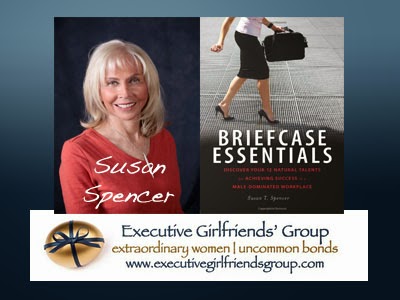 This on demand audio series is a part of the Executive Girlfriends Group Vignette Series. Chicke Fitzgerald interviews Susan Spencer. The original live interview was 9/14/12.

This episode is #28 of all time in the top 50 shows on Solutionz Live!

After Susan Spencer graduated Villanova Law School she joined a large Philadelphia law firm and worked as in-house counsel of the Philadelphia Eagles. After several years handling all the legal matters at the Eagles she was promoted to VP and General Manager–the only woman to ever hold all three positions with a professional football team.

Five years later, after the team was sold, she started her own food distribution company. Within three years her company was doing ten million in sales.

Briefcase Essentials, Susan’s first book, has received the Axiom Award as one of the best business books of 2011. Briefcase Essentials was written to share her stories about working in male dominated industries and describe how she used 12 natural talents that all women possess, to succeed in a business world that is currently dominated by men.

Her series of articles about women’s issues and professional football have been featured on CNBC.com, The Huffington Post, and Reuters.com among others. Susan is a featured lecturer, and provides commentary on numerous sports radio shows. She also finds time to mentor young entrepreneurs.

For more information about the Executive Girlfriends' Group see: http://www.executivegirlfriensgroup.com/
Posted by chickefitz at 6:00 AM