Is the Sabre IPO ominous for the GDS industry?

This week, Bloomberg announced that Sabre raised $627 million in its IPO.

Actually I don't think you should be allowed to call it an Initial Public Offering when you have already been public once.  It should be an SPO.  The former unit of AMR Corp. was traded on the New York Stock Exchange from 1996 until it was taken private a decade later by TPG and Silver Lake.

Whatever you call it, this public offering was definitely lower than its expectations of $895 million.   Uh, ya think??

Sabre's market cap at the end of this first week of trading was $4.04b.  Absent the news about their expectations for the IPO, this may sound great.  That is until you remember that in 2006, TPG and Silverlake bought the company for approximately $4.3 billion in cash, plus the assumption of $550 million in debt.

This now begs the questions,  "Is this result ominous for the GDS industry as a whole?". 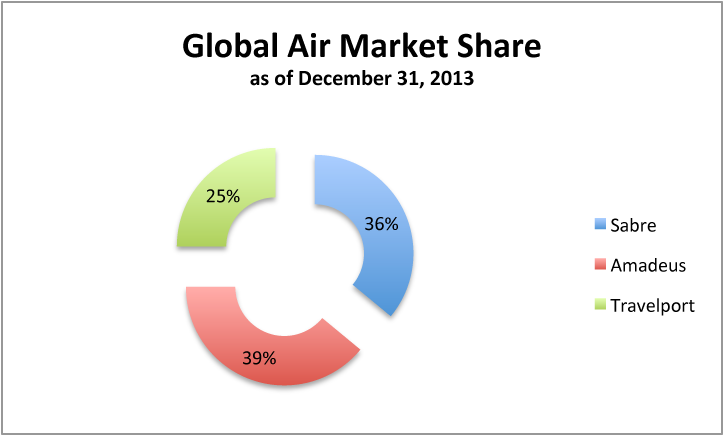 Sabre Corporation (NASDAQ: SABR) is one of three companies serving the travel industry with global distribution technology and services.

Now, anyone that knows me will expect what I am going to say next.  Any sector within the industry that measures itself on air bookings is doomed to enjoy limited success.  Why?  Because at least here in the US, just 15% of all travel is by air.   Now to be fair, these three companies enjoy combined revenues of $9.4 billion, earned primarily from travel by the air traveler (including selling them hotels at their destination and rental cars).  Imagine if they ever tapped into the remaining 85% of travelers.

So back to the discussion of whether Sabre's valuation is ominous for the industry.  If we were looking at the industry based on Sabre's IPO alone, it would indeed appear ominous and you would expect Amadeus' results to be only marginally better than Sabre's based on market share.

But when characterized against rival Amadeus' results, the story takes a much different tack.

Amadeus (AMS.MC on Madrid Exchange) is the only other public company in this small sector, currently trading at $29.22 with a market cap of $13.0b.   Yes, that is more than 4x the value of Sabre.

And there is nothing ominous in Amadeus' stock performance, as portrayed in this chart on Bloomberg.com.

BC and Cinven have to be very happy with their investment.  TPG and Silverlake?  Not so much. 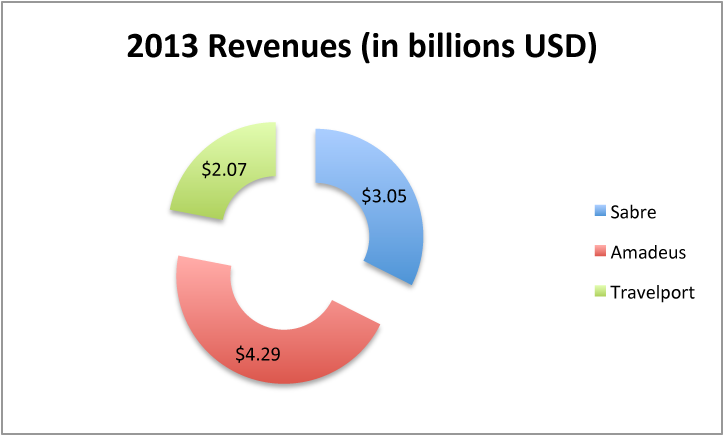 Travelport is the only private company now, with Blackstone as their majority shareholder.  The company reports 2013 net revenue of more than $2.067 billion USD.   This contrasts with Sabres $3.05 billion USD revenues for the same period and Amadeus' $4.29 billion USD in revenues.

While this three-horse race appears to be very close when you look at market share, the revenues paint a very different picture.  Amadeus has 46% of all GDS industry revenues, Sabre brings in 32% revenue share and Travelport has just 22% of the revenue share.

So if you are on the small side of this pie, perhaps the Sabre IPO news is a tad ominous.  But for Amadeus, they are strong and getting stronger.   And Sabre and Travelport, I would say it is time for you to wake up and start serving the drive market.  Maybe you'll catch Amadeus asleep at the wheel.  Or not.

Posted by chickefitz at 3:52 PM