OK, who is REALLY the biggest GDS?

As I look back through all of my blogs, the second most popular one is "Who is the biggest GDS".

(For those wondering what the first most popular blog was, it was the one "To Delta Airlines:  I would have built the website for $80 million.....").

Well, it is time to put this argument to rest.

At this juncture, if you are not a part of the travel industry, you are wondering what in the world is a GDS.  In short, GDS stands for Global Distribution System.  The travel and tourism industry is one of the world’s largest industry segments, contributing $6.6 trillion to global GDP in 2012, according to the WTTC. The industry encompasses the GDS companies, travel suppliers, including airlines, hotels, car rental brands, rail carriers, cruise lines and tour operators around the world, as well as travel buyers, including online and offline travel agencies, Travel Management Companies (TMCs) and corporate travel departments.

In travel, the three GDS companies are Amadeus, Sabre and Travelport.  These companies provide the bulk of technology to travel agencies worldwide and also power most major airlines' reservation systems.


Let's talk about the global picture first - Amadeus is #1 globally. 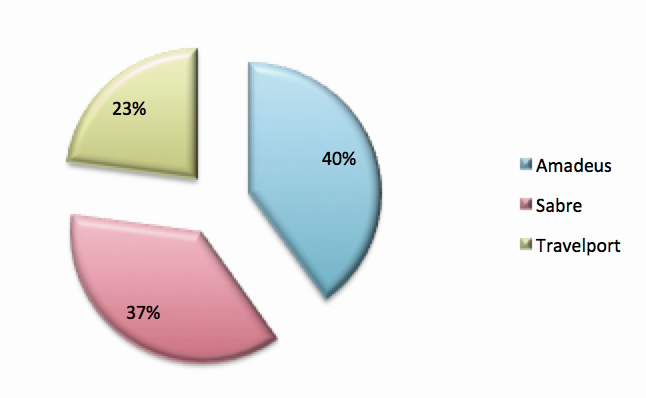 Of that revenue, just under 75% is from the GDS/travel agency side of the business and 25% is from their airline services business, where they power over 110 airlines worldwide.

They employ over 12,000 people worldwide and are a public company, listed on the Spanish stock exchange (AMS.MC).

The Beat, a subscription newsletter for travel industry executives, recently published that "Amadeus in 2013 grew its global distribution system marketshare of worldwide agency air bookings by 1.5 percentage points year over year,  to 40.1 percent."   Now the interesting thing about this statistic is that in the US, which is the largest market in the world for the GDS companies, Amadeus is #3 in a field of 3, with just 12.5% of their bookings coming from this important market. They are endeavoring to change that statistic and in fact are growing their US share, largely through their contracts with Expedia and most recently, with Orbitz Worldwide, but also through winning new airline hosting clients, such as Southwest.

Amadeus has historic strength in Europe and still holds the #1 position in this important market.  Sabre reports that it holds the number one position in Asia/Pacific with 40% share, due to its ownership interest in regional player, Abacus.

On to the US picture where Sabre holds the lead.

The number one position is held by Sabre, followed by UK-based Travelport (with its Apollo, Galileo and Worldspan brands) and Amadeus is in third place.

Sabre reported 2012 revenues of $3.0 billion.  The company is currently privately held, with TPG and Silverlake as the primary shareholders.

In their recent S-1 filing for their upcoming IPO, Dallas TX-based Sabre published that their US market share (based on airline bookings reported via MIDT for 2012) is 58%.   This puts them squarely in first place, as the largest GDS in the US.   In fact, Sabre's leadership also extends into Latin America, where they also reported 58% market share for 2012.

Despite being number one in the US, in a recent amendment to their initial S-1, they reported that full-year direct billable airline bookings processed by Sabre last year fell to 314 million, down nearly 4 percent from 2012. Including non-air travel transactions, total direct billable GDS bookings last year declined by 3 percent to 368 million.

The airline and hospitality business lines are the fastest growing segments of Sabre's business, with a 44% increase in revenue in 2013 over 2012.

Hidden in this story is Travelport, number 2 in the US and number 3 globally with 23% share.  With a presence in over 170 countries, approximately 3,500 employees worldwide, and a 2013 net revenue of more than $2.067 billion U.S. dollars, Travelport is comprised of the global distribution system (GDS) business, which includes Worldspan™ and Galileo™ GDS platforms, its Airline IT Solutions business and a joint venture ownership of eNett™. Headquartered in Atlanta, Georgia, USA, Travelport is a privately owned company.

Travelport is a significant shareholder in Orbitz Worldwide.

Posted by chickefitz at 1:36 PM