This week, in addition to writing about Entrepreneurialism, I have been cleaning out my office and have been going through old notebooks from my consulting days.  There is some fascinating stuff.

One thing that hit me when reviewing my notes from 2000 was a comment made by an executive in one of my client companies that in a particular area, they hadn't had enough investment in a particular line of business.  As a result, at best, they would be 3rd in a field of 5, where the #1 and #2 players held the bulk of the market share globally. 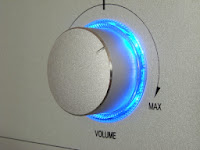 This was a business that they had been playing with since the company was founded, but it was definitely not their core business.  I thought his comment about the business was worthy of a footnote to my blog about entrepreneurial investment, but this time it is about corporate investment in non-core businesses.

His advice was simply "Turn up the dial or turn it off".

Several decades ago, when I was at Sabre, I headed up a new division of the company called Capture.  It was an automated expense report product and it was way ahead of its time (this is a recurring theme for me).  The year was 1988 and PCs were not ubiquitous in business and the Internet was still just a research project.

About three years into it (and about $5m in investment without a return), I was in an executive session of all of the company's VPs and business unit presidents, Bob Crandall (then CEO of AA, Sabre's owner).  When it was my turn on the agenda to give an update, Crandall simply said "Is that still around?  Shut it down.".   And he then proceeded to go on to the next item on the agenda.

I didn't get the chance to turn up the dial, as he just turned it off.  Overnight 90 people lost their jobs and I had to find them another place within the Sabre organization or within the airline.

Our expense management product was in beta test at Unisys, Digital Equipment and Sun Microsystems and I had the pleasure of telling them that we were turning off what was perhaps the first core business application built on their UNIX based operating systems that would put the processing in the hands of someone other than accounting or data processing.

The only redeeming thing that happened that day was the Mr. Crandall came up to me and said in his signature gravely voice "If we thought you were doing a bad job, we would have shut you down.  As it was, we just shut the business down.".

Now I will have to say that Bob was probably right to shut the division down, as despite the size of our staff, we didn't really have the support we needed across the organization to turn this from a project into a real business.

If you are a corporate executive and you have non-core businesses that are under-performing, don't just turn them off.  Things may have changed since you started the venture in the first place.

Ask what it would take to turn up the dial and only then make your decision.

But if you decide to shut it down, make sure that you give the business leader a redeeming moment to blog about 20 years later.

(Thanks Bob.  @CrandallAA from the "installer without a home")


Chicke Fitzgerald
corporate escape artist and serial entrepreneur
Posted by chickefitz at 11:44 AM