Late to the Video Marketing Party?


Being late to the party is not always a bad thing.

Those of us that are innovators know that when you are first, there is a lot of learning that has to happen to get it right and the price for that can be very high.  There is a reason that the early pioneers got arrow in their backs for their efforts and that entrepreneurs often talk about the blood, sweat and tears experienced along their innovation journey.

Innovators set the stage for those that will follow, learning the painful lessons and establishing best practice for their peers. 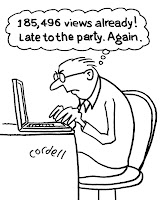 In this cartoon by Tim Cordell, we are faced with a gentleman that is musing about being late to the party - presumably a pattern for him based on his remarks.

The video he is viewing has already had nearly 200,000 views.  We don't know from looking at him whether he is upset because he wanted to be the one to find (or better yet, produce) that amazing viral video, or whether he stumbled on it after working til midnight, inventing the next big thing.  In either event, his comments indicate he feels like he is a laggard.

The travel industry as a whole were key innovators in the digital marketing arena.  I would even argue that we invented e-commerce, selling travel products electronically on a global scale as early as the 80s.  At least this was the premise for my first book, eCommerce Pioneers - the History of Global Travel Distribution.

As you look at the Technology Adoption Lifecycle popularized by Geoffery Moore, author of Crossing the Chasm, it is easy to see that as an industry, we were one of the first to cross this particular "Chasm".   We are now moving headlong into widespread adoption of not only e-commerce, but many companies in our industry are also aggressively pushing the envelope on the mobile platform.  We are seeing use by not only the early majority, but also the late majority.  Only the laggards hold onto their flip phones, seeing their lack of adoption of a smart phone as a badge of courage.

We now face an interesting anomaly.  The same companies that led us across the digital marketing chasm and the e-commerce chasm, including those who are showing us best practice in mobile marketing are somewhat "fashionably late" to the integrated video marketing party.

As you look at the top sites in most every category within travel, video is conspicuously absent.

Digital marketers instinctively know that rich media is valuable, yet we don't see widespread use of this particular asset.  Perhaps they think it is too complex or too expensive.

We know that video inspires, it educates and yes, it even increases sales.

So rather than fearing this chasm, I encourage you to stick with us on Video and Beyond and learn how to take your marketing to the next level - moving past early adopters to the mass market, increasing conversions with every step of the way.

In the coming weeks and months, Kulin Strimbu (with the occasional guest post from yours truly) will be covering the basics of video (things like commonly used terminology and debunking the myths), to some of the more sophisticated uses of your video assets, such as syndication or monetizing through associated display of your content on media sites.

Take time to subscribe to this blog and if you have questions or recommendations of companies that are demonstrating leadership and innovation in the integrated use of video in their digital marketing strategies, please use the comment section and we promise to respond.

When it comes to video marketing, are you late to the party?  Not to worry!  This party will be going on for a very long time.   Fun will be had by all.

Video sells.  What are you waiting for?

Posted by chickefitz at 4:30 AM