The new lingo of BIG DATA - multiples of bytes

Today I listened to the PhoCusWright session on Big Data and discovered a new vocabulary that had previously escaped me.  Christopher Lynch of Atlas Ventures was throwing around the term petabye like we all knew what it was.

So I was compelled to look it up and summarily tweeted it for anyone else in the audience that was curious or needed new cocktail reception conversation for the next industry conference.  Done and done.

So then I proceeded to write a blog on why the travel industry is NOT ready for primetime when it comes to Big Data and came across an Economist video that  reports that the quantity of global data is forecast to be a staggering 7,910 exabytes by 2015, over 60 times greater than 2005.

OK, now my single tweet was wholly insufficient.  Now we need to know what an exabyte is.

So here we are.  Courtesy of Wikipedia, I present to you - multiples of bytes. 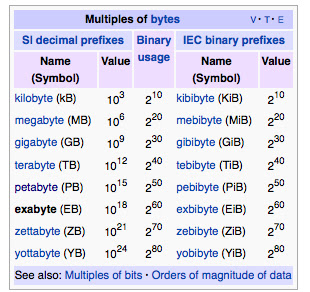 I am oddly frightened by this whole thing.  I'm sure I'll get over it once my MacBook Air has 100 yottabyes.  I like that one!

Stay tuned for why IRM (the replacement for CRM) will need yottabytes and yottabyes of data!