This is the second in a series of blogs this week about the 3Q2012 Airline Reporting Corporation  statistics.   Today's topic is the average value of an international airline ticket. 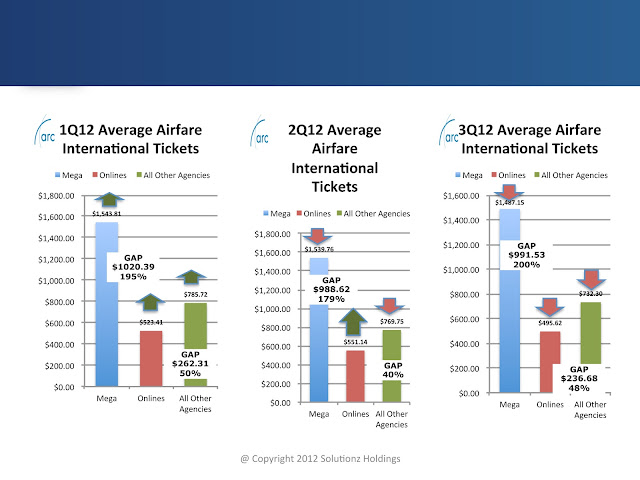 First, it shows that quarter over quarter, for the first quarter all channels were up as it relates to the average value of an international ticket.  In the second quarter, the travel agent channel (both mega and other) were down, with only the OTAs showing an increase.  but in the third quarter, in all three categories, fares were down.  Like domestic ticket pricing, this is good for consumers, bad for the industry.

With online having the greatest decline, you can be fairly certain that the airline's own average for sales over their website are following that same trend.   This is born out by a simple search on Kayak for just about any city pair -- the airline price is as low or lower than the online travel agency price.

So if you are an airline and you are trying to shift international travelers from a travel agency to your own website, I have just one word for you - STOP.

In 3Q2012, the Mega agencies produced an average ticket that was an astounding 200% higher than the online channel.  This $991.53 is sure to cover any commissions/volume overrides and the GDS booking fee.  On average, the total of these two items on a $1,487.15 ticket would be no more than $164.71 (assuming a 10% payment to the agency and a $16.00 GDS booking fee).  That leaves $826.82 of profit for the airline on top of the fare that they would have earned by selling on their own website.

In the same quarter, the gap for the other agencies over online was $236.68, a 48% gap.  Using the same calculation methodology, that leaves $147.45 in profit for the airline.

As always, if you are an airline, I urge you to run your own numbers and do all possible to sh

Tomorrow we'll look at percentage of domestic business coming through each of the channels, then on Thursday, we'll look at the international business mix.

Chicke Fitzgerald, strategist and resident iconoclast
Posted by chickefitz at 3:19 AM