Over the last two days we took a look at US travel agency sales of domestic airline tickets.

Today, we are going to look at the international air transaction volume by agency channel.

Thanks to the Airlines Reporting Corporation (known as ARC) for providing the data for today's post.  As a reminder, ARC settles transactions for the Mega Travel Management Companies (Amex, CWT, BCD, HRG, Maritz, Omega, CWT/SATO, SATO), the Online Travel Agencies (OTAs) and the other brick and mortar agencies.   All told, as of April 2012, there are 13,896 ARC approved travel agencies in the US.

International air ticket sales by the agency community is an interesting study.

As we talked about on both Tuesday and Wednesday's blog, the airfares for international air tickets issued by the Mega agencies is nearly three times the fare issued by an OTA (and by default, by the airline itself).  To be clear, this is NOT because they charge more for the exact same ticket, but because their client base tends to be corporate travelers that fly business and first class more frequently and even for the coach fares, elapsed time and number of stops tends to be more important than price.

And even with the brick and mortar (non-Mega) agencies, the ticket price is nearly double that of their OTA counterparts.  Again, not because they charge more, but because the dialogue at the point of sale does not begin with the lowest price.  Agencies are trained to cater to the overall needs of the traveler (who they are traveling with, why they are traveling, when they need to arrive, how they will get to their destination and yes, how much).

In 2011, the OTAs lost 1 point of share to their brick and mortar counterparts for international ticket sales, with the Megas picking up 1% share and the other agencies remaining static.  In the 1st Quarter of 2012, the share held by the Megas actually decreased by 2 points, with the other brick and mortar agencies picking up 1% share, and the OTAs also gaining by 1 point.

All in all, on a net net basis, distribution hasn't changed at all in the 2+ year timeframe, with 72% of international tickets coming from Mega and other brick and mortar agencies and just 28% from the OTAs. 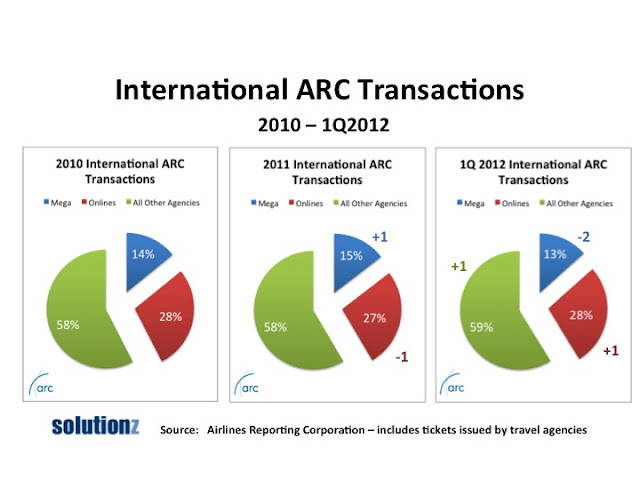 As always, the story is not complete until you look at the revenue mix.

Stay tuned tomorrow to see what this picture looks like when we look at the revenue split for international air transactions.
Posted by chickefitz at 3:00 AM