Yesterday we took a look at the average airfares per channel, but viewed in isolation, those numbers are not as meaningful.

Today, we are going to look at the domestic air transaction volume by agency channel.

I would like to thank the Airlines Reporting Corporation (known as ARC) for providing the data for today's post.

ARC settles transactions for the Mega Travel Management Companies (Amex, CWT, BCD, HRG, Maritz, Omega, CWT/SATO, SATO), the Online Travel Agencies (OTAs) and the other brick and mortar agencies.   All told, as of April 2012, there are 13,896 ARC approved travel agencies in the US.

From all the noise that we hear in the press, if you would close your eyes and try to create this chart progression, from 2010 to the 1Q of 2012, I think most of you would say that online has gained on the traditional travel agency channels (Mega plus the other Agencies).  This is not the case. 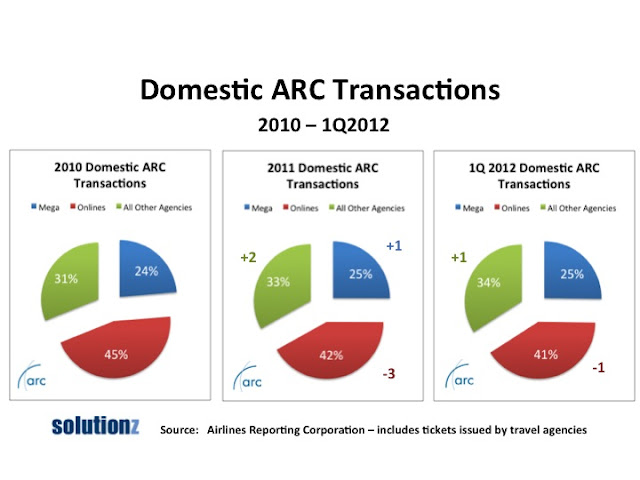 So, with the higher yields from both Mega and All Other Agency categories, the overall picture from agencies distribution (even with commissions, overrides and GDS fees) is still a positive one for the airlines, with 59% of their distribution coming from the higher yield channels and just 41% from the OTAs.

And now, you know the rest of the story.

Stay tuned tomorrow to see what this picture looks like when we look at the revenue split for domestic air transactions.