With all the noise over airline distribution, how has it really changed since 2010?

For well more than a decade, I've been analyzing the changes taking place in airline ticket distribution here in the US.  There is a lot of noise over this issue, particularly as the airlines continue to invest in direct distribution and their online presence.

Nothing quiets noise quite like the facts.    Today's post will focus on the difference in airfares for the travel agency channels.  The data is provided by the Airlines Reporting Corporation (known as ARC).

ARC settles transactions for the Mega Travel Management Companies (Amex, CWT, BCD, HRG, Maritz, Omega, CWT/SATO, SATO), the Online Travel Agencies (OTAs) and the other brick and mortar agencies.   All told, as of April 2012, there are 13,896 ARC approved travel agencies in the US.

Let's start with the average airfare for each channel.  Yesterday I wrote about this for the most recent quarter in 2012.   Here is a picture of how this has changed since 2010.

In measuring their effectiveness as a distribution channel, the Mega and brick and mortar agencies consistently produce higher average ticket prices (and as a result, a much higher yield) for the airlines than their online travel agency counterparts.

In 2011, international airfares increased 5%, 4% and 3% respectively for Mega, Online and all other brick and mortar agencies over 2010.  In the 1Q of 2012, international airfares increased 4% over full year 2011 each for brick and mortar agencies.   Mega agency average fares remained basically the same.  Online agencies were the only ones that saw a decrease at 7%. 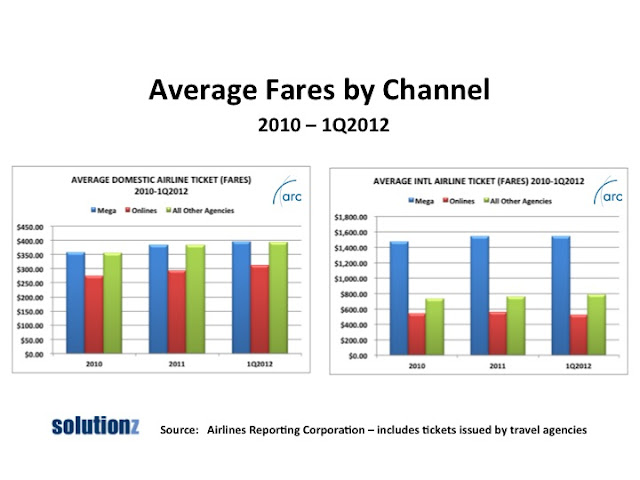 Tomorrow's post will focus on the changes in Domestic Air Transaction Volume.

Stay tuned.
Posted by chickefitz at 7:38 AM

One could not but play for a moment with the thought of what might have happened if Charlotte Brontë had possessed say three hundred a year — but the foolish woman sold the copyright of her novels outright for fifteen hundred pounds; had somehow possessed more knowledge of the busy world, and towns and regions full of life; more practical experience, and intercourse with her kind and acquaintance with a variety of character.

“Travel has a way of stretching the mind. The stretch comes not from travel’s immediate rewards, the inevitable myriad new sights, smells and sounds, but with experiencing firsthand how others do differently what we believed to be the right and only way.” – Ralph Crawshaw