What would US Air acquisition of AA mean to GDS disputes? 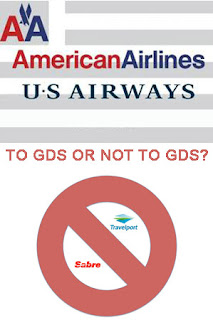 This is the multi-million dollar question.

The US GDS companies might hope that an acquisition of this size and scope would remove the focus of one or both carriers on the GDS dispute.

This might be true if US Airways had not gotten into the fray on what I will call "GDS Market Domination", aka antitrust.

American's attack on GDS distribution has been very high profile.

What some may not know is that in April of 2011, US Airways also filed suit against Sabre, alleging that Sabre has "engaged in a pattern of exclusionary conduct to shut out competition, protect its monopoly pricing power and maintain its technologically-obsolete business model."

US Airways and travelers would see enormous benefits if Sabre were forced to compete on both price and innovation. US Airways is committed to trying to ensure that Sabre can no longer continue its anti-competitive conduct at the expense of consumers and US Airways.

US Air has done a short term settlement with Travelport, as reported by Travel Weekly writer Johanna Jainchill.

Travelport said that its existing content agreement with US Airways will continue “well into 2012.”

“All US Airways published fares and inventory, including Web fares available on its own website and through third parties, will be available to all customers in the U.S. and Caribbean who participate in Travelport’s GDS systems,” Travelport said.

Dan Westbrook, Travelport’s vice president of supplier development, further stated that the fares will be offered by US Airways “without any change to the terms for our subscribers.”

The thing that I still find so very interesting about this whole fray is that both American and US Airways host their inventory on the Sabre Airline Services platform and there has been so much noise about "direct connect" technology.  There is no more direct connection than being hosted in the same platform as your distribution partner's system.

I realize that there is a risk of sounding like I don't understand the issues.  Trust me, I do understand what the airlines are complaining about, I just do not agree with their conclusion.

GDS powered brick and mortar travel agency bookings on average yield $91.42 more per domestic booking and $197.29 more per international booking, with the Mega agency numbers coming in at $109.67 more per domestic booking and a whopping $1079.55 more per international booking.  These stats are directly from the Airline Reporting Corporation for the 3rd quarter of 2011.

In any other industry, the board room discussion would sound something like this:

"How can we drive more business through this high-yield channel, where our costs are more than covered by the increase in average revenues?"

I do understand that there are better, newer technologies that have emerged for distribution of airline inventory online and via the traditional agency channel, and I would like to go on the record as being supportive of introducing innovation into the equation.

I believe there is a truce that can be called in this war.  My proposal?

Let's allow the airlines to put the distribution technology in place that makes sense for them and handles their merchandising and online distribution needs.

For the GDSs, rather than connecting directly to the inventory system of the airline, you would then be connecting to the distribution platform of choice.  As long as you continue to bring in high yield business to the airlines that more than covers your distribution costs, this should be a win-win for everyone.

I'll soon be posting the 4th quarter ARC numbers by channel, which I guarantee will continue to support my proposal.     Stay tuned.


Posted by chickefitz at 8:11 AM No comments:

Travelport reported its 2011 results.  Net revenues were up for the full year at 2% over 2010, but operating income was down 27%.   In an interview with CEO Gordon Wilson, Travelport attributed the loss to the reinstatement of bonus programs for its employees.

Travelport's GDS transactions during the December quarter grew by 2 percent overall and 4 percent in the Americas versus prior-year levels, the company announced.

The regional mix for Travelport in 2011 for the Americas was up from 49% of total, to 50% of total.  The other regions each declined less than 1% each, but if you look at 4th quarter numbers, the declines were in Europe and Asia/Pacific with MEA growing 1% of total.

“2011 financial results were in line with expectations. Total transaction value for air travel and hotel sales was 6% higher at $83 billion, and we launched and deployed four significant, innovative new products designed around our new technology platform.
“We are making excellent progress on our strategic plan, delivering the broadest possible travel content for suppliers and travel agency customers to buy, sell and promote.”

Posted by chickefitz at 6:56 AM No comments: