We force them to "make nice" with each other, finding middle ground that works for both of them.  It is our hope that they are building lifelong negotiating skills.  We expect that this will have a positive ripple effect on our family and on their families once they are grown and on their own with kids.

We are witnessing two historic conflicts right now, both with a significant ripple effect beyond the base issues.

The first and most important one is with our Federal government that can't figure out how to "make nice" about our multi-trillion dollar debt.   Last night the President and the Speaker of the House tattled on each other to the American public on national TV.

As a business owner and unfortunately knowing first hand what default looks like from a failed business endeavor, I related to the harsh, almost parental words of the Speaker, who spoke not only as politician, but as an entrepreneur.

But as important as resolution of that issue is, since the stakes are so very high, I will trust [and pray] that resolution comes soon.  Too much is on the line and neither side will suffer the consequences alone.  If we default, our nation would suffer and it would be like throwing in a very large stone into a lake at dawn - we would clearly see the ripples for a very long time.  More importantly, if the country's credit rating falls, like the pundits on ABC said last night, things may adjust to the new normal, but they will never be the same. 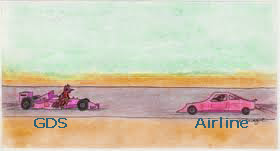 My issue today is between the founding fathers of an era in our industry.   It involves parent (AA) and child (Sabre), among others.

And we have just over 35 days before the ripple effect of this particular debate would be felt around the globe.  And if it isn't resolved and this dangerous game of chicken ends with a firery crash, we may adjust to the new normal, but things will never again be the same.

And no, I am not being melodramatic.

I am a realist at heart and as a published author on the topic and a consultant to the investment community for the last 10 years, trust me, I am well versed on the issues at hand.

Like arguments between children that typically raise in volume before they are resolved, this one is at a fevered pitch right now.  TNooz reported last Friday that Sabre had raised booking fees, again.  I maintain that this is but one more step to demonstrate that they finally understand their value in the distribution chain.

Both parties have spent what I can only assume is now millions on legal counsel (if you count the internal salaries of those supporting the litigation and the consultants and expert witnesses working on the background information).

American maintains in the tattling to the DOJ that Sabre and Travelport have a monopoly.  I maintain that signing agency contracts for the provision of services to them is what they were created to do over three decades ago -- by the airlines themselves.   I fail to see how it is any different than American signing gate and departure slot deals at DFW, St. Louis, Nashville and other hub airports, which for many years has made them the dominant carrier there.  It is what they do.  They fly airplanes and they concentrate on hubs, because the hub and spoke system works.

I won't recount the details of the yield issue here again today, as I've written many times over the past few months about this.  But if you look at the real issues and if I were the parent stepping in to resolve the fight between children, I would be saying this about "making nice":


To the Airlines:
I rest my case.
Stay tuned.

Chicke Fitzgerald
Posted by chickefitz at 7:07 AM