Don't be fooled. Direct Distribution is not free

I sit, admittedly somewhat amused, by suppliers that look at their distribution options and discard what they deem as "higher cost" channels in favor of direct distribution.

In May, I wrote about what happens when you only look through one lens when making your decisions on distribution.  This same premise is true when looking at costs of external distribution, but not taking into account the fully allocated costs of internal distribution options (online and call center).

When I do the math on the aggregate industry numbers, as we did earlier this week in the story about AA needing $10 more per day per passenger,  I simply can't see how shifting more business to their own web sites can make economic sense.

If on a domestic air ticket sold through an average brick and mortar agency, an airline makes on average $26.49 more per ticket, even with a commission (which we know that most agencies no longer receive) and GDS fees, then even if direct distribution was free, they couldn't make up the difference in volume.

And on international air tickets, the airline makes on average $67.83 more per ticket (and with Mega Agencies they make $815.24 more on average per international ticket), so shifting them to an airline.com makes even less sense.

So what costs do you need to take into consideration for direct distribution?  In short, it is those expenses that not only drive consumers to your site, but also the costs of servicing that client.  These include both your fixed costs (e.g. your marketing and development teams that support online and your call center costs) and variable costs: 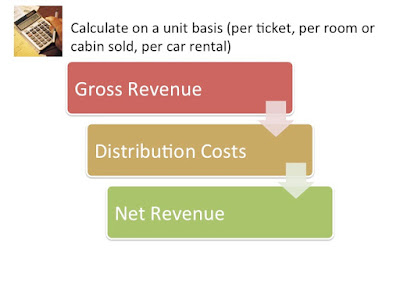 Do your own math.

Here is the equation.  It is simple and it works for both internal and external distribution.

You will likely find that most players in a given channel will have similar gross revenues on a per transaction basis, but the costs may vary.

So in order for this to work, you must do it for each channel (or even each player in the channel, as Orbitz may bear a different net revenue for you than Expedia and the GDSs may have different distribution costs).

One thing is for sure in this equation, you can't have a zero in distribution costs for the internal equation.  It is not free.

If your internal picture actually comes out ahead of GDS driven, brick and mortar agency distribution, I want to hear your story.  And I would like your permission to share that story (and how you got there) in my upcoming book on Multi-Channel Distribution - The Essential Guide (being published in August).

Stay tuned, tomorrow we'll unpeel the onion on channel profitability for hotels.
Posted by chickefitz at 9:48 AM