Looking back through my various posts, this was the all-time favorite, based on number of views, so I thought I would repost it. 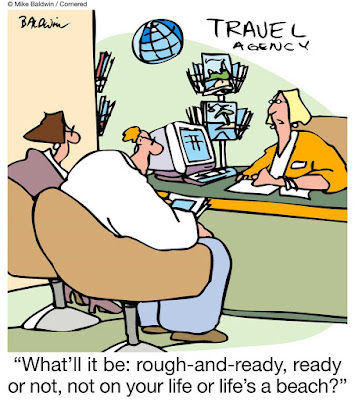 I have been in the travel industry since 1978. I started in a travel agency in Milwaukee WI, working for Bay Travel in the suburb of Whitefish Bay.

We had a leisure agent who at the time was older than God himself and who had been everywhere and done everything. Her name was Agnes.

Every time I see this cartoon by Mike Baldwin, I think of Agnes.

Agnes was the quintessential travel agent. She knew how to start the dialogue from whatever worked for the client.

No, Agnes knew what they liked when they were traveling as a couple, as a family, in the summer, in the winter, when they were wanting to relax and when they were seeking adventure or just following their inbred sense of wanderlust. She knew that it wasn't always the same things. The type of hotel might change, restaurant recommendations, attractions, entertainment. Well you know. You don't always want the same thing either. But the industry and our technology has button-holed us into strict profiles. Business and Leisure if we are lucky. Beyond that, you have to wade through the options yourself and weed out what you don't want.

If they wanted to drive versus fly, Agnes didn't care. She knew that she would make up the lost commission (yeah, remember when selling an airline ticket guaranteed you a 10% commission?) on booking their hotel rooms for them. She didn't use the newfangled Apollo™ computers. She felt more comfortable talking to the various travel suppliers to ensure that what they were offering was a perfect match for her clients.

If they did know where they wanted to go, Agnes would help them have the best time possible there. She scoured the brochure rack (now I'm really dating myself) and would recommend things that she had done in those very places. While the term "social networking" had not yet become vogue, I suspect that Agnes was a master networker and had a card system where she could cross reference what other clients had been to the places that they were interested in.

And if you didn't know when you wanted to travel, Agnes was ok with that. If you knew that you wanted to travel in the spring, she'd suggest things that were good spring things. And if you said you wanted to go to a dude ranch in the winter, she wouldn't suggest Montana, but instead would find something for you in Arizona or New Mexico. And if all you knew was that you had 4 days for a trip, she'd be able to tell you what you could and couldn't reasonably accomplish in that timeframe.

Best of all, when all was said and done Agnes would type (yes on an IBM Selectric™) a custom itinerary, including things that couldn't be booked, but that she knew they would want to know about. Even when she saw that Apollo™ could print an itinerary with the air, hotel and car segments, she knew that her clients needed more. I even saw her attach a map for the clients that wanted to drive.   I didn't even know that AAA existed at that time, so from my own limited experience, Agnes produced the first custom "TripTik™".

Posted by chickefitz at 8:17 AM