The Online Travel Agencies (OTA) are an important part of the travel distribution story.  Today's feature is Travelocity.

Travelocity's pedigree is somewhat simpler than Expedia's.    This is what we call the "come home to papa" story (with Papa being Sabre).   The story actually started a bit before the 1996 date shown in the graphic below. 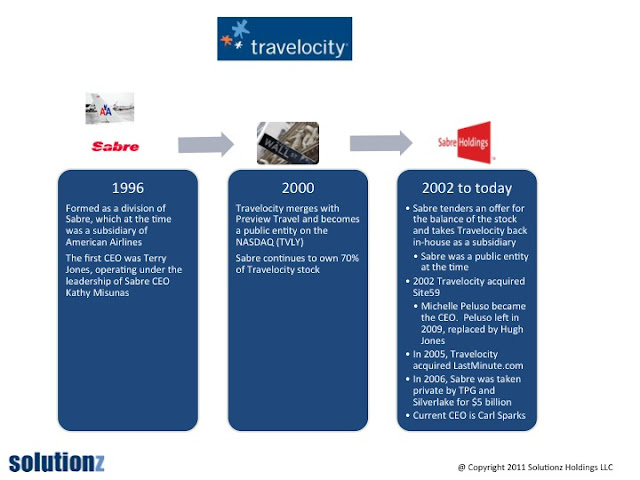 In the mid 80s, under Kathy Misunas' leadership as CEO, Sabre started dabbling in what was then called "new media".  In 1986, EAASY Sabre (double AA's because of American Airlines' then ownership of Sabre) was launched on Compuserve.

This and other equally fun projects (Sabre Vision, Commercial Sabre and ultimately Sabre Interactive, the group that spawned Travelocity) were the playground of Sabre CIO and innovator, Terry Jones.

Travelocity was officially founded in 1996.  In the ensuing years, it was credited with powering Yahoo Travel, AOL Travel and much more recently, American Express' consumer portal.

In 2000, Travelocity merged with public company Preview Travel and began trading on the Nasdaq as TVLY.  Sabre retained 70% of the stock.    Bill Hannigan was the CEO of Sabre at that time.

Then in 2002, amidst heavy competition from Expedia and Orbitz and following the decline in travel post September 11th, Sabre tendered an offer for the balance of the Travelocity shares and took the company back inside.  At the time, Sabre was publicly traded.

Sabre's Sam Gilliland stepped into the CEO role at Travelocity.  Under his leadership, in late 2002, the company acquired Site59, a last minute deal site.  When Travelocity CEO Sam Gilliland was named as the CEO of Sabre in December of 2003, Site 59's Michelle Peluso stepped into the Travelocity leadership role.  By that time, Jones had left the company.   He has gone on to a number of board roles, including being Chairman of Kayak and is a frequent speaker on innovation.

In 2005, Travelocity expanded into Europe in a big way, through the acquisition of LastMinute.com.  Then in 2006, Sabre was taken private, in a buyout by TPG and Silverlake for $5 billion.

Travelocity too has come a long way.  Here they are then and now.

Although just 15% of all travel in this country is by air, like all other OTAs, Travelocity focuses its efforts primarily on the air traveler, with the booking engine still defaulting to purchasing airline tickets.  They also sell hotel rooms, cars and rail bookings, cruises, activities and have a packaging engine to dynamically package flights, hotel and car.

They had a brief stint in 2007 where they launched a product for the drive market, with LeisureLogix' journey planning tool which combined travel planning, mapping and navigation with location based content for 89,900 cities, towns and villages in the US.  But at the time, they were busy launching Experience Finder, a product that 5 years later is still in BETA and has just 30 cities and ended up shutting down the RoadTrip Wizard in April of 2008.

Next up in the Travel Industry Pedigree Series:  Orbitz (the child running as far away from its parents as possible)
Posted by chickefitz at 5:00 AM