Not nearly as dramatic as the stories of their American counterparts, today's Pedigree Series is on Opodo, the leading European OTA. 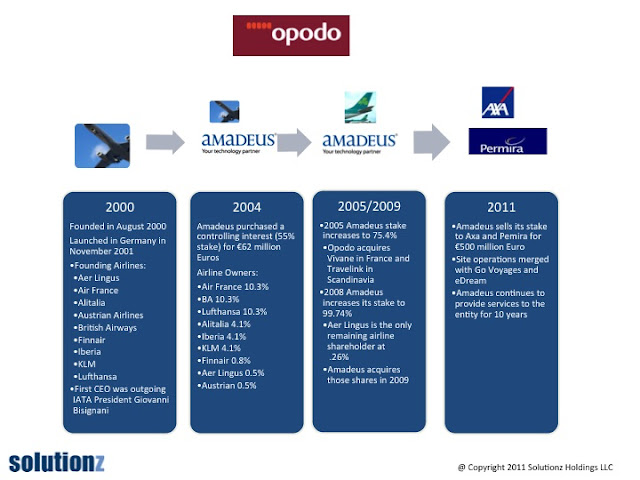 Opodo was formed in 2000, following the creation of Orbitz.  The company had a similar model and a similar structure.


The site was powered by Amadeus, for what I hope are obvious reasons.  In 2004, Amadeus purchased a controlling interest (55%) of Opodo for 62 million Euro.  This followed a large loan to the company in the previous year.    This of course diluted the airlines' ownership, but at that time, all the airlines elected to remain owners.


In 2011, Amadeus sold its stake to private equity players, Axa and Pemira, for 500 million Euros.  The new owners are merging in Opodo with Go Voyages and eDream.

Just as an aside, had Aer Lingus stayed in, their .26% stake would have been worth a tidy 1.3 million Euros.   Maldición!   I'm betting Amadeus didn't pay them quite that much.....

Amadeus netted a 10 year services deal out of the transaction.  Smart.   And that is the "rest of the story".


Tomorrow, in the last and final story in the OTA Pedigree Series, we'll touch on both Priceline and Zuji, both of whom have a very simple story, as there has not been a lot of ownership change.

Til then, say tuned.
Posted by chickefitz at 5:00 AM