The Online Travel Agencies (OTA) are an important part of the travel distribution story.  Today's feature is Expedia. 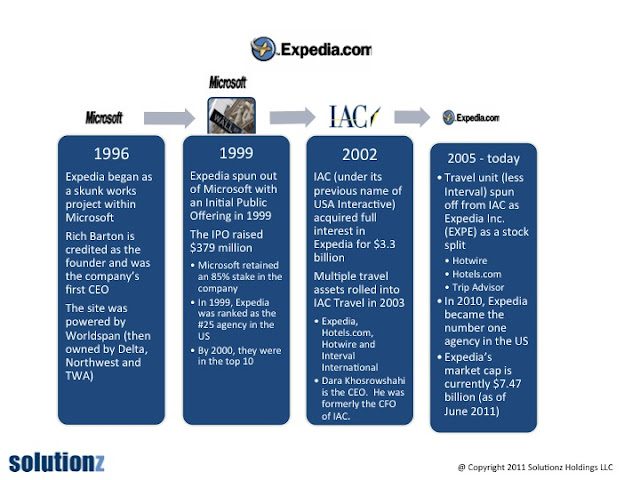 Expedia began as a skunk works project within Microsoft, with then 29 year old [dare I say "pup"], Rich Barton at the helm.

Unlike its competitors over the years, there were NO airline investors in Expedia.  The site was powered by Worldspan, then owned by Northwest, Delta and TWA.   To say they have come a long way is an understatement.

In 1999, Microsoft spun Expedia out on its own, in a very successful IPO, raising $379 million.  Microsoft retained 85% of the stock.

While the company was public, Barry Diller (USA Interactive at the time) took an interest and started buying up stock.  In 2002, he acquired full interest in Expedia for $3.3 billion and rolled the assets into a new business unit at IAC, dedicated to travel.  That unit included Expedia, Hotels.com, Hotwire and Interval International.   Diller put another young pup,  IAC CFO Dara Khosrowshahi at the helm to prepare IAC Travel for the spinoff into Expedia Inc.   Dara is now 41 years old.

In 2004, Expedia expanded its GDS relationships to include a deal with both Amadeus and Sabre.

In 2005, the spinoff was complete and IAC Travel (excluding Interval International) became the foundation for Expedia, Inc.   Dara remained at the helm.

By 2010, following a number of acquisitions and the launch of Corporate Expedia (later renamed Egencia), Expedia moved into the number one agency slot worldwide, ahead of both American Express and Carlson Companies.

Expedia currently sports a market cap of $7.47 billion, just under the market cap of the merged Delta/Northwest entity.   Expedia plans to spin off Trip Advisor this fall.

Barry Diller is still the Chairman of the Board.

Expedia is the #3 ranking Travel Site (as of the week of June 4th) based on Hitwise statistics.   Expedia is neck and neck with Priceline.  The only other OTA in the top 10 is Orbitz.

Next up on the Travel Industry Pedigree Series:   Travelocity
Posted by chickefitz at 5:00 AM