I promised a shorter blog today.  So we'll get right to the point.

I am an information hound and have an extremely short memory for numbers (aka prices), so my favorite thing by far with Orbitz is their screen utilization.  As I mentioned, they invented the Matrix™ display and while others have copied it, they have perfected it.  Unlike Expedia, where you have to scroll right and back left to see everything, on Orbitz it is all one screen, using all the screen real estate. 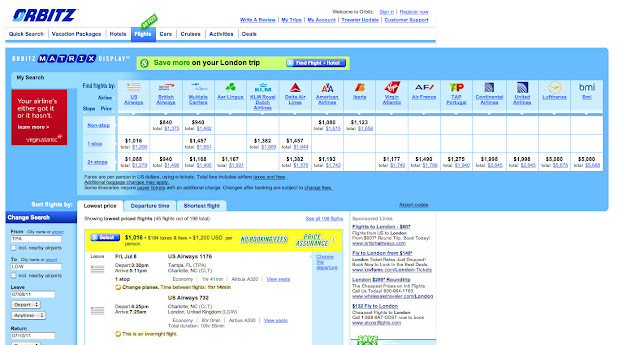 In its advanced search options, Orbitz allows you to easily search one day before and one day after.

From there, we diverge pretty significantly.  While Expedia elected to tell us the fares, including taxes and fees (which can be substantial), Orbitz shows the base fare in a larger font and the total fare in a smaller, blue font.    Expedia puts a caveat that the fares are "from" a particular fare, but as we showed yesterday, good luck actually getting that fare.  On Orbitz, what you see is literally what you get (as long as your session doesn't time out and you have to restart the search).

The differences in taxes and fees are actually pretty incredible, with the non-stop tickets on BA, AA and Iberia all having $535 in fees (!) and the one stops are in the $180-200 range.  OK, I could write another whole blog on fees.  And these aren't even the ancillary ones for baggage and seats!  Those are over and above.

But I digress.  The fees aren't unique to Orbitz, they just choose to expose them.  Odd marketing move, as I'm quite sure that it will do nothing but anger customers to be that aware.

On Expedia, Delta was the lowest price at $908 for 2 stops and $1012 for one stop.  On Orbitz, those prices are $1644 and $1576 respectively.  Not sure what gives with that.  They are also significantly higher on American, but with their recent spat, that one is not so surprising.

Orbitz does not showcase constructing your own connections, but instead shows you the paired flights and on the side allows you to break them apart by "choosing" either the departure or the return.  It also does not allow you to sort by arrival time.  It does elapsed time of the flights, but calls it "shortest flights".  Makes sense.  On international, this is paramount since the variation can literally be half a day.  Both Expedia and Orbitz do a good job of showing layover length, which can also be a huge deal on international, particularly on your way home.

Orbitz does offer a guarantee, but it is "price assurance" that another Orbitz customer won't get a better price (or you get an automatic refund in the form of a check).  That is actually a pretty safe bet for them to make and not anywhere near as gutsy as Expedia's comparison to everyone outside their world.

Both companies prefer that you also buy a hotel, since they make much more on a hotel room than an airline ticket.  Both companies do a good job of merchandising that and in fact they do a much better job than most travel agents do on bundling products.  We called four agencies today and none of them tried to secure a hotel room for us while we continued to shop for airfares.

The upside for using Orbitz over an agency?  No booking fees and the Price Assurance™ guarantee are important points, as are their free mobile trip updates and 24/7 Customer Care when enroute.  Again, some agencies have this service as well, but often it comes with a service fee for each ticket.

The upside for using an agency over Orbitz or any other OTA?   Complete, unbiased airline information (at least for now) and the ability to recommend the lowest logical airfare for any given itinerary and preference set.

Orbitz has an impressive voice activated response system, gathering data about the caller, but like many similar systems, they don't hand off the information to the person answering the phone.  Although it seems on the surface that the call center is offshore, their call center has done significant "Americanization" of the accents of their people.  I had a much better experience with the Orbitz call center person and didn't have to tell him the city codes of Tampa or London's Gatwick airport!

So are you smarter than a travel agent after using Orbitz?  You tell me.

If you are still not sure, watch this 8 minute video:

Oh, and Happy Birthday Orbitz.  They are ten years old.
Posted by chickefitz at 5:00 AM