Distribution Basics: Who has the power? (corrected version)

Following our assessment yesterday of the distribution basics for an airline, we thought it would be  interesting to look at the metrics that are used to gauge the relative power of companies in the public markets and see how they might relate to the power in the distribution game in travel. 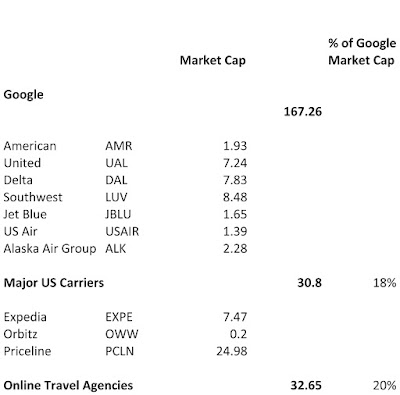 Here we use Market Cap data from Yahoo! Finance, as of yesterday.

Google, the new kid on the travel block, with its purchase of ITA Software, has a market cap of $167.26 billion. We are including Google in this assessment, not because of ITA per se, but because of what Google can do with that asset in hand.  If the Google search for a city pair (e.g. Tampa to London non-stop) yields a field for the date of the trip and returns metasearch results from the ITA engine versus traditional search results with both SEO and SEM as a driver of those results, then the entire distribution game will change.  Interestingly enough, a few weeks ago, search on Google did exactly that, but that feature has now been removed


In this analysis, since the two US GDS companies (Travelport and Sabre) are privately held, we cannot do the same market cap comparison with that part of the distribution channel.   But we can report that Amadeus has a market cap (as reported by Bloomberg) of $6.3 billion.

There was once a day when physical assets made the difference in market capitalization.  Surely the hardware owned by these 7 airlines (not to mention their property assets), must surpass the equipment in the server farms and the property of Google.  And the GDSs collectively must have more physical assets than the OTAs.

But the market no longer judges worth (and hence power) by such measures.  The ability to take one's assets (whether it be a brand with a simplistic logo and search bar, a gleaming silver bullet flying through the air, a robust one-stop shop for travelers or a network of high value transactions from travel agencies worldwide) and monetize them on a sustainable basis is what makes companies valuable.

I leave you with this one thought.

NOTE:  We originally erroneously posted that Travelport was the largest GDS company in the US.  We have since learned that this is not the case and that Sabre holds that spot.   Since the US GDS companies are not public, the specific booking share figures are not published, other than in MIDT data.

Stay tuned.
Posted by chickefitz at 8:36 AM