Arlington, Va. – January 12, 2011 – ARC, which serves as the U.S. financial settlement engine and data repository for the airlines’ travel agency sales channel, today announced that domestic airline travel in 2010 returned to levels approaching those achieved prior to the financial crisis in 2008. At the same time, ARC noted that 76 of the top 100 airports posted gains for the year, with select Midwest and New York State airports achieving the largest increases.

Based upon aggregate ticket volume data, ARC said domestic travel in 2010 increased by 7.0% from a year earlier. According to ARC’s data, domestic travel – tickets with an origin and destination in the U.S. – dropped significantly with the onset of the recession in 2008, posting a decline of 7.1% in 2008, before bottoming out in 2009 when volume posted a year-over-year decline of another 8.3% below 2008 levels. Since that time, ARC’s data show there was a steady recovery throughout 2010.

“There are clear signs that the environment for domestic travel has rebounded to levels we haven’t seen since before the global recession,” said David R.B. Collins, ARC’s president and chief executive officer. “The data for 2010 clearly show that travellers are returning to the air for domestic travel.”

ARC has more than 180 airlines as customers and hosts the single, largest database of airline tickets in the world. Analyzing its wealth of available data, ARC not only is able to identify critical information based on actual events but can also use such data to forecast patterns and future trends.

This is a continuation of our series on IRM™ - Individual Relationship Management.  To catch up, see the first two part series, authored by John Fleming of Solutionz.

We are a mobile society.  We are on the move.  We insist on remaining connected when we leave our homes.  We want access to the same stuff we have at home.  We also want help in finding what we are looking for, if in fact we aren't sure of the details of navigating to our destination.

Today's hyper-local content focus is evolving rapidly.  We have mobile apps, websites and GPS systems where points of interest are tagged with latitude and longitude, where pictures of the destination are available and can be integrated into my driving directions and where I can actually "check in" to a particular location and get an offer that is relevant to that place (e.g. at or close to the place) and share it with others in my network.  Amazing really.  But I maintain that the status quo is not enough.

Let's agree that the goal is to get from amazing to brilliant and even beyond that to WOW.

When you deliver location based information or offers over a smart phone, a tablet, a website or a GPS device, what you don't know and can't see by my previous behavior is what my current situation is (e.g. who I'm with) and my intent in accessing the data (e.g. what am I trying to accomplish, which we believe is a combination of mode and catalyst).  Well, that just sounds too hard, so most systems just go the safe route and deliver the same information to everyone.

Said simply, it is one thing to push me a coupon for Dunkin Donuts when my 10 and 12 year old kids are in the car and I'm driving near one.  It is quite different to do that when I'm alone.  I prefer McDonalds' coffee (don't tell Starbucks) and don't really like donuts.  So just because I am nearby, doesn't mean that the offer is relevant to me right now.

Another approach is to provide a list of the Top 10.  The assumption is that just because something is popular, that I will like it or find the information at the very least, interesting.  So the approach of serving me the top restaurants when I travel to Washington DC is tantamount to a waiter serving me a plate of pork chops without me ordering and when I ask why, he tells me that it is the top thing that was ordered the previous day.  Well, perhaps I don't eat meat or I just don't like pork.  I don't know about you, but "top" across a wide range of people will rarely be my top.

And if I'm looking for a restaurant in Tampa, I don't want to see every choice for all 69 types of cuisine.   I just want what I like.  No, correction.  My husband is with me.  I like Indian and Thai.  He is patently opposed to the "extreme" types of ethnic food (emphasis mine).  He'll go for Mexican and Italian, but not much beyond that.  But wait, now the kids are coming a long and they won't eat Mexican.  Now once we get this narrowed down, serving me a "top" list can work, but it isn't a home run 100% of the time.  Bear with me on this one.

So another dimension of my search is my intent.  If I want to take my daughter's softball team out for pizza, clearly there are many choices.  If I am looking at the "user generated content", also known as consumer opinions, just knowing that ABC restaurant has great pizza, doesn't tell me whether it is softball mom/team friendly.

Same thing for a hotel.  I may see a great hotel online and read the reviews and find one that is really terrific.  I am going on my 20th anniversary trip with my husband.  Imagine my surprise to find out that the reviews were written by a bunch of soccer moms/coaches who traveled with 10-20 teenagers that don't sleep and love to bang doors when going from room to room?   Knowing their situation and intent would have been helpful before I ruined my anniversary trip.

IRM takes into account my situation and my intent.  If you touch a consumer face to face or voice to voice, versus online, you can start to implement IRM in your call center, at your front desk, in your store, your restaurant, etc.  Online, a little tougher without technology......

To get started, review your strategy.  If you do not have a customer centric approach to everything in your business, that is a good place to start.

If you need more information about that, visit our website.
Posted by chickefitz at 4:59 PM No comments:

Is it time to "make nice" with the offline travel agency distribution channel? 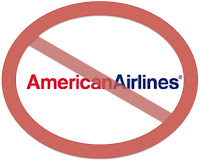 Sharpening conflict online between OTAs and Airlines renews discussion about the value of the offline distribution channels - namely the mega agencies that focus largely on the corporate traveler and the other, nearly 16,000 brick and mortar agencies still in business in this country.

As we listen to the media talk about the Expedia and Orbitz battle with American Airlines, I thought it would be useful once again to talk about the value of the various distribution channels from a NET profit basis basis from the airline perspective (as compared to the cost basis, which is what they generally talk about).   And by the way, have you noticed that Henry Harteveldt of Forrester is EVERYWHERE in the media these days?!

Here are some stats and assumptions.
So you can see American's point in being willing to take the chance of pulling out of this particular channel.  You generally can't make up losses in volume, unless you have a total handle on your cost structure.  And with fuel prices targeted to soar in 2011 and 2012 and labor contracts still being an issue to the major airlines, which are still unionized, it may just be better for them to take out some seats, give the passengers more legroom (can I get an amen to that?) and make a profit on the seats that they sell themselves and those sold by their offline travel agent partners.

However, I fear that if American feels that they have scored a win on this particular battlefield, they will then proceed emboldened to continue their distribution shift away from the traditional travel agencies, who they alienated at the beginning of the last decade, first with commission caps, then cuts, then out and out elimination of commissions as a birthright.

For the reasons outlined below, I believe this would be a very bad move. 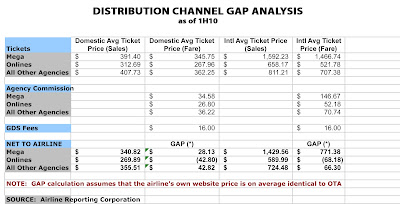 First, let me talk about the source of this data.  The Airline Reporting Corporation keeps track of all tickets issued by the distribution community.
This includes the mega agencies, which are mostly corporate  (Amex, Carlson Wagonlit, BCD, HRG, Maritz, Omega, CWT/SATO and SATO), the online agencies (Expedia, Travelocity, Orbitz, etc.) and "all other agencies", which at this time is made up of just under 16,000 agencies.  The numbers in the chart are for the first half of 2010.

Second, let me talk about my assumptions in creating this chart.
Now those of us in the industry know that consumer direct from a supplier direct is by no means a FREE channel.  They have call center costs, branding/marketing costs, web development and infrastructure costs.

So before they try to go after this "high cost" channel, it would behoove the leadership at American and the others to take a look at this analysis with their own figures.

We know from experience that the use of broad industry averages can be misleading when looking at your own situation as a supplier.  For instance, if you put your head in the oven and your feet in the freezer, the average temperature of your body is not really relevant, is it?

So go do your own homework.

It is 2011 and business fundamentals still work.  You have to make more than you spend, and still have to service what you owe. Don't make the mistake of assuming that your own channels are "cost free".

Make friends of those that sell your product at the highest possible price and cost you less than your own channel.   And if you choose to say goodbye to those who sell a large quantity of your product at a true loss, then so be it.
Posted by chickefitz at 11:08 AM No comments: