How TripIt and FourSquare have changed my travels (aka Robert Cole are you following me?) 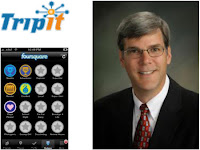 My travel is forever changed by Social Media.  I now have a running battle with Robert Cole as to which one of us is following the other one (literally)!

A few weeks ago I was in Washington DC for the launch of a new project with a new client and a few days in advance, saw a notice on Tripit that Robert was traveling.  So he was my first official "meetup" due to social media.

For those not familiar with Tripit.com, it is an amazingly useful tool that allows you to email your various and sundry itineraries to their plans@tripit.com email address (once you have your account set up of course) and they will extract the itinerary components out of it and put it into a trip file.  Tripit also has an application on LinkedIn so you can alert those who follow you about your travel.  You control what you feed to Tripit, so if for some reason (can you say clandestine M&A activities?) you don't want anyone to know about a trip, you don't have to send it to them.

You can also set up "friends", hence my affiliation with Mr. Cole, and be alerted as to their upcoming travel plans.   If you happen to be planning on travels to the same city, then voila!  The meetup can occur.

TripIt was founded in San Francisco in October 2006 andlaunched in September 2007. The company has raised $6.1 million from investors that include O’Reilly AlphaTech Ventures (OATV), European Founders Fund and SabreHoldings.  Greg Brockway is the President and co-founder.

Then last week I was invited to attend an analyst conference for global outsourcing firm NIIT in Boston.  I have been playing around a bit with Foursquare on my iPhone and as I checked into the Boston Airport and to the Hilton, I saw a note from Robert commenting on how it was great to stay in a hotel where you could literally walk from the airport terminal.  I actually laughed out loud.  Twice in the space of three weeks I connect with the same person via social media, in two different cities using two different social media tools.  What are the chances of that happening?

Foursquare is a relatively new on the scene, launched in January of 2009, but is growing like wildfire.    It is amazing what $20+m in venture funding can accomplish.  Last month they had 1.5 million unique visitors to their website and are #18 in the social media category on the mobile "app" download list published by topappcharts.com.

Foursquare is considered a "geo local" application and competes with the likes of Gowilla (paling in comparison with just a quarter of a million unique visitors to its website and #90 on the social media app download chart).

Here is a list of some of the other players in this space.   Of course, to succeed, it is all about volume and about your ability to "go viral". 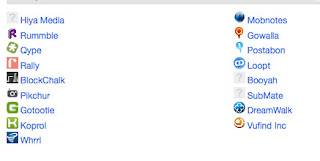 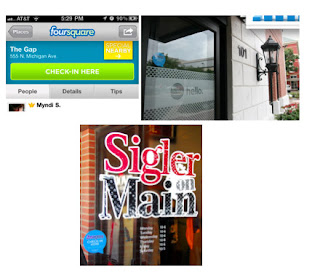 Foursquare is moving out of the digital realm and cementing their viral success with "check in here" window clings for businesses that have a lot of Foursquare check-in activity.  Smart.

The moral of the story is that I am not alone in the impact of social media on my travel.

Social media and geo local applications are changing travel on both a local level and for traditional travel on a global level.

If you don't yet have a smart phone, get one.   If you aren't using at least some of the more popular applications such as foursquare and tripit, get on the bus.  It is leaving with or without you.
Posted by chickefitz at 8:22 AM 2 comments:

“It’s not the strongest or the most intelligent of the species that survive; it is the one most adaptable to change.”

Charles Darwin
Most credit Darwin with promoting the concept of survival of the fittest. Although fitness and strength are clearly important in business, it is adaptability and flexibility that generally prove to be the greatest assets. And now is a time when these skills are essential, as change is rampant in our industry – on all fronts but most of all in travel marketing and distribution.

This week, four years from the time that LeisureLogix was originally formed, we are finally having to put RoadEscapes.com to rest.

For those of you that know me personally, you will know that RoadEscapes.com was a strong concept, an intelligent approach and that it was adaptable to the change in our industry.  But two years ago after we launched the first iteration of this product on Travelocity under the name RoadTripWizard, the funding that we needed to take the product to market and to further develop the product for global distribution had not yet been secured.

The curious thing is that less than 30 days after launching on Travelocity, we were the first winners of the now coveted PhoCusWright Innovator of the Year award for the product, a vote from our peers in the travel industry.  And less than 30 days after that, the company was all but shut down, with just a skeleton team left to get the company sold.

In 2008, in the 9 months before we let the last person go, as the crash of the economy made it clear that getting further funding or selling the company was not likely, we accomplished amazing things.

My colleagues [and dear friends] Rebecca McGoye, Connie Goscinski-Smith and Kit Cox helped to completely retool the business model to shift from eCommerce to advertising, as well as to position us for social media and social commerce.  The site was relaunched as RoadEscapes.com in September of 2008, but was used primarily for demos to potential partners and investors.

Although we were not driving traffic to the site (on purpose that is), we were still experiencing astounding page views per unique visitor.  In 2008 we had 30 pages per unique visitor and in 2009, that went up to 36.7.   And in 2010, with a lot of the key functionality like profiles and saving trips no longer functional, that number actually went up to 38.4 pages.  These numbers are enviable for anyone that understands the ad model, particularly since the site also supported the eCommerce model for air, car, hotel and attractions bookings.

Now mind you, from the time the idea was conceived to the time that we let the last person go in the fall of 2008, we had raised $7m, the bulk of that from a single lead investor, without whom we could never have succeeded in building the game changing technology.  But, unfortunately it was not enough to get to the next level of development and to take the product to market. 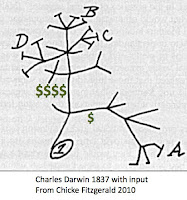 At least that is true for RoadEscapes.com.  This week, it will join the other great, underfunded applications in that great innovation graveyard in the sky.  But one thing is different with this one.

The idea will NOT die.  My lead investor is still a believer, despite the fact that the venture to date has not been a commercial success.

This week a number of colleagues have applauded my tenacity, but without my lead investor's support, even in failure, I couldn't take the next step.

We are still awaiting U.S. patent approval for our industry changing ideas and are confident that we stand alone in what we conceived and what we built.

The LeisureLogix team cracked the code on multi-dimensional, contextual, filtered search.  We delivered multi-faceted results in a single search result based on who you are at the time of search, not based on past performance or a single dimensional profile or even the contents of a CRM system.

We succeeded in knitting together location-based content, journey planning, travel booking, mapping and navigation.  We created the next generation of dynamic packaging - taking a story from ANY medium (TV, radio, magazine, newspaper, web or just word of mouth) and made it "adoptable" and "customizable".  Amazing stuff really.

The whole experience from start to finish, although one of the most difficult of my life, was richer for me than any other thing that I have experienced in my 30 year career.  I wrote about it in my contribution to Bootstrap Business, co-authored with Tom Hopkins, Jack Canfield and John Christensen.  To order, click on the image.

While operating in an uncertain business and economic environment is uncomfortable at best, ignoring change is not an option for travel and tourism companies, or the technology companies that serve the industry.

We are moving forward.  The dream will live on.  It too will be richer for the experience - with full integration of mobile and social.  Interested in being a part of creating the true industry game changer?  Tap into the mobile generation.

Read more »
Posted by chickefitz at 9:54 PM No comments:

Posted by chickefitz at 3:29 PM No comments: