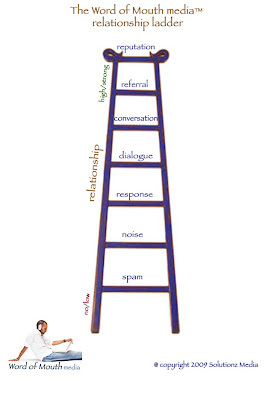 You've invested a lot of time in trying to elicit a response. Perhaps the reason that you haven't been successful (yet!) is that you are spread too thin.

This week I made a major decision which was predicated by coming to the realization that I was indeed spread too thin, in a lot of areas of my life, including social media.

For those that know me well, you'll understand that it takes a lot to get me to that point, as multi-tasking is my middle name.

Getting people engaged in dialogue online is getting more and more difficult. Case in point - Groups on Facebook and Linked In. Lots of people join them, perhaps to have that "badge" on their profile so people know what they are interested in, but very few people get engaged to the point where they are actually eliciting dialogue.

Dialogue is first and foremost a function of LISTENING. You can't have a meaningful dialogue if you are the only one talking. That is called monologue for a reason. So the difference between Rung #3 of trying to elicit a response and #4, DIALOGUE is how much listening you are doing versus talking.

Is your response one that is just intended to turn the attention back to you? Or do you really care about the other person's views and their needs?

Are you an airline that sends offers to your frequent flyer list, but forget to "filter" them to their departure city and showcase the cities that they've flown over the past 24 months? That is DIALOGUE. Sending the same email to everyone about your specials is NOISE.

Get involved with what people are talking about as it relates to your products and services, your destination or the general area of your expertise.

One of the characteristics of true online dialogue is when it has more than a single cycle (e.g. a comment that may have a response, but no more interaction) or when someone else chimes in, having found value in your contribution.

To get to multiple cycles, well, that is Rung #5 - Conversation. Stay tuned!