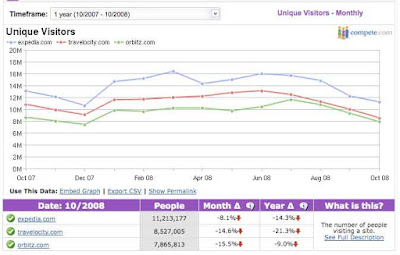 After years of growth, the online sites are all experiencing their first significant year over year decline. Various sources are reporting different statistics, but all of them are headed in the same direction - down. With the Fed now fessing up to the fact that the recession began in December of 2007, this is not surprising.

Comscore is reporting more pessimistic numbers with Expedia coming in at a 25% decline, Travelocity 16% and Orbitz 23%, all year over year. Their stats on Priceline and Kayak show a 24% and a 93% increase year over year. The Kayak numbers are a bit suspicious, in light of the tremendous delta from the Compete numbers.

Bottom line, is that October is the beginning of a normal cyclical low for the year, reflecting normal seasonality, so the month over month numbers shouldn't be seen in isolation from the year over year numbers.

The year over year numbers are clearly signaling a vote of confidence for the opaque model and metasearch. The OTAs as a whole need to either hunker down and tighten their belts, or they need to search out new sources of revenue. I will hold my tongue on that one........ if you follow this blog on a regular basis, you know what I have in mind.

Chicke Fitzgerald
Posted by chickefitz at 7:34 AM