The Distribution Ecosystem - The GNEs, where are they now? 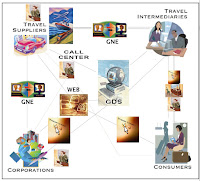 For over 30 years now, the distribution ecosystem has been evolving, providing multiple ways for sellers to reach buyers.

Those that have been around the industry for any amount of time will remember the days when the GDS not only sat in the center of the distribution diagram, but they were synonymous with distribution. That picture has changed over the years.

In the late 90s, the web became a viable tool for suppliers to reach consumers directly and even corporations. Although the Internet nearly always yields a lower profit per transaction, it is the fastest growing distribution channel for suppliers. See my hotel distribution story below and my blog on agency distribution on the Beat (http://www.thebeat.travel/blog/blog/328) and do the math for yourself if you are skeptical about this claim.

A few years ago a couple of firms, known as GDS New Entrants or GNEs, burst on the scene with a flurry, promising to totally disrupt the ecosystem, offering an alternative for suppliers and agencies alike. Their focus was on providing a lower cost for the airlines to get their products onto travel agency desktops.

Where are they now?

ITA lead the pack, actually coming on the scene in the mid-90s. The founders were MIT grads that had found a clever way to revolutionize shopping for airfares. VCs, including Battery Ventures, Generaly Catalyst, PAR Capital, Sequoia Capital and Spectrum Equity Investments, believed in them early on and in 2006 they closed a $100m round. They are now focused on revolutionizing airline reservations system technology and the travel agent desktop is no longer the prime battleground.

G2switchworks, funded early on by several major airlines prepaying greatly reduced booking fees, developed technology for the agency desktop that connected directly to the airlines. Their claim to fame was that they would save airlines 81% of the normal GDS booking fees. That technology was recently purchased by Travelport, effectively removing yet another GNE from the fray.

Farelogix is the last one on the GNE horizon, remaining true to their travel agency focus. From the beginning, although they too provided a way for airlines to connect directly to travel agencies, they took a different tack, as middleware, versus replacing the desktop entirely. This has served them well. In January of this year they announced that they were adding access to the ITA airfare shopping and pricing capabilities.

While reducing distribution costs was the original catalyst for the emergence of the GNEs, the challenge they faced was one of penetration on the demand aggregation side of the equation.

Airlines tried to strong arm both agencies and the GDSs during the last round of participation agreements, citing the GNEs as their clear alternative.

What they underestimated, was the power of the incumbent (and the contracts that were in place). Travel agencies had long term agreements with their GDS that often had significant penalties for early termination. The GNEs were very vocal early on about not "buying business" as the GDSs have been doing from each other year after year. Consequently, they weren't successful at penetrating the agency marketplace.

It is one thing to offer suppliers a less expensive way to reach buyers and it is quite another to aggregate enough demand to displace the incumbent.

And when the incumbents are funded by private equity firms that have collectively invested over $16b over the last 36 months, well, the challenge is even greater.

So, the suppliers turn their eyes back to the Internet as their primary battleground.

As I mentioned, the article below shows that for hotels, there is as much as a $31 discrepancy between selling through the agency channel (even with commissions and booking fees). And on my blog on the Beat, assuming that airlines are experiencing a similar average ticket price online as the OTAs, there is a $51 shortfall between the average agency sale and an OTA ticket sale (including commissions and booking fees). It is tough to make up those shortfalls in volume.......

So my question remains "Why is there a battleground at all?".

The agency channel is a strong, variable cost distribution channel. The infrastructure is there to effectively connect buyers and sellers. High yield demand is backed up by statistics, both from Travelclick and from ARC and the increased yield more than covers the cost of that distribution.


Chicke Fitzgerald
Posted by chickefitz at 6:37 AM